New Delhi, Sep 17(PTI) Telecom Minister Ravi Shankar Prasad today said that call drop issue would be resolved within a month, even as he termed the protest against tower radiation a 'sinister' campaign hampering network functioning. 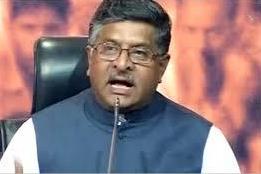 "I ordered term cell to conduct an audit. Trai did an audit. Our Department is monitoring. Within a months time things should improve. That is impression I have," Prasad said at an event of International Chamber of Commerce.

The call drop problem during peak hours in one year has almost doubled, as per a report of telecom regulator Trai.

He said that complaint against call drops and campaign against mobile tower cannot go together.

"This sinister campaign of ill effects of radiation, people need to come out of it. There is difficulty in installing mobile towers. I examined it (radiation) very thoroughly myself with my proper lawyer background. I read the entire literature. There is WHO report with 30 thousand plus sample. It is not injurious," Prasad said.

Telecom operators often approached the government to help them allay fear among people of ill effects from mobile tower radiations so they can easily install towers. The companies have brought to notice of the government about residents protest against mobile tower and hampering their functioning.

Prasad said that existence of radiation is not the issue but whether it is "injurious" or not is the issue.

"It is not. As a minister I am very clear that if anyone is going to show me unmotivated medical evidence I am ready to look into it," Prasad said.

He added that there has been no instances of anti-mobile tower radiation campaigns in the US, Europe and China.

"Why in India? If there is a gap we need to address them," he said.

The minister said the government is doing its duty and telecom operators need to perform theirs by optimising, synchronising and making adequate investments to improve mobile networks.

"We appreciate expansion of data (Internet) but you shift your infrastructure to data and make voice a casualty, this is plainly not accepted. Lastly, most important, spectrum has been given. Don't give the impression that you only want to collect customers and their service become something indifferent," Prasad said.