Chennai, Aug 11 (PTI) Indian techies often change their names when they start working in the US and so did P Sundararajan, but not all become Sundar Pichai -- the new CEO of global technology giant Google. 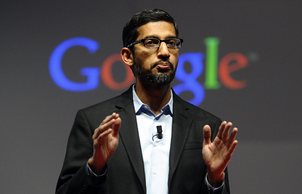 43-year-old Pichai, who expanded his initials and shortened his name after shifting to the US, began his career with Google in 2004 as a "low-key" manager and colleagues say there is no single Googler who did not like him ever.

From working on the Google toolbar, to the very successful Chrome browser, IIT-Kharagpur graduate Pichai became a clear number-two to the then CEO Larry Page last year and was made the CEO of a re-organised Google on Tuesday.

While at Google, he also refused a job offer from Twitter, the popular social media platform which was on Tuesday flooded with posts to congratulate him.

Known to be a shy person, Pichai was very selective in saying "thanks", and those to whom he replied included Microsoft CEO Satya Nadella, another Indian-origin person who has hit it big in the US, and Apple CEO Tim Cook.

"I remember him being very focused and studious in school. He left after class X to join another school," said P Subramaniam, who was one year senior to Pichai at Vana Vani Matriculation School in Chennai.

"I remember him being very quiet and reserved", he said.

Later he completed Class XII from Jawahar Vidyalaya at Ashok Nagar area of the city.

Pichai did B.Tech from IIT-Kharagpur, after which his teachers suggested him to go for a PhD. He, however, decided to pursue MS from Stanford University, and an MBA from the University of Pennsylvania.

He joined Google in 2004 as its vice president of product management, where he led the team working on Chrome browser and operating system.

Before joining Google, he also worked at McKinsey and Applied Materials.