Mumbai, Apr 13 (PTI) Forecast of above normal monsoon and inflation falling below 5 per cent boosted the benchmark BSE Sensex by 481.16 points on Wednesday to 25,626.75, its highest level in over three months, as auto and banking stocks rallied on hopes of better rural sales and another rate cut by the RBI. 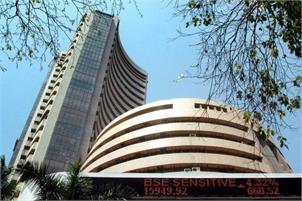 With this, the barometer has erased all but 100 points from this year's losses, which had at one point plummeted to more than 3,000 points.

On the day, bullish global cues sparked by strong macroeconomic data from China and surging oil prices after reports of a deal between Russian and Saudi Arabia to cap the production played a part.

Besides, persistent buying by retail investors lifted the small-cap index by 1.06 per cent and mid-cap by 0.91 per cent.

For the holiday-shortened week, Sensex and Nifty logged a hefty rise of 952.91 points or 3.86 per cent and 295.25 points or 3.76 per cent, respectively, halting two straight weekly slide.

"It is raining gains in stocks market. Participants were upbeat after a host of factors namely, forecast of good rains, further easing of consumer price inflation and a rebound in industrial production," said Shreyash Devalkar Fund Manager Equities at BNP Paribas Mutual Fund.

Market will remain closed on Thursday and Friday on account of Ambedkar Jayanti and Ram Navmi, respectively.

Meanwhile, In its World Economic Outlook, the IMF retained 7.5 per cent expansion forecast for India in 2016 and 2017.

In stock specific action, Wipro finished 2.89 per cent up at INR 584.60 after the company said its board would consider a proposal for buy-back of equity shares later this month.

Stocks of fertiliser, irrigation system and agri machinery manufacturers continued to hog the limelight for a second consecutive day, rising by up to 7 per cent, on forecast of "above-normal" monsoon this year.

From the auto pack, Mahindra & Mahindra jumped 7.40 per cent and VST Tillers Tractors rose 3.14 per cent.

Europe was also higher with indices in France, Germany and the UK gaining by up to 2.53 per cent. .