No sign of end to jewellers' strike; shops remain shut

New Delhi, Mar 26 (PTI) Gold and jewellery establishments in many parts of the country remained closed for the 25th day today as traders protest against the budgetary proposal to impose 1 per cent excise duty on non-silver jewellery, even as the government set up a panel to look into their demand. 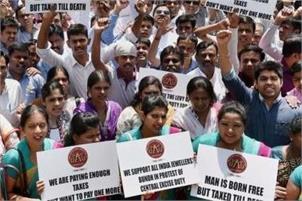 Traders in several parts of the country, including in Delhi and Kolkata, kept their shops shut today.

Most of the jewellery showrooms in Tamil Nadu however were open for regular trading.

All India Bullion, Jewellers, Swarankar Federation (AIBJSF), which had organised a rally at Ramlila Maidan here on March 17, is continuing the strike, though three major associations - GJF, ABJA and GJEPC - had called off the strike last Saturday after government's assurance that there would be no 'Inspector Raj'.

Meanwhile, the government has constituted a panel under former Chief Economic Advisor Ashok Lahri to look into the demands of jewellers.

The panel, which has been asked to submit its report in 60 days, will look into issues related to compliance procedure for the excise duty, including records to be maintained, forms to be filled, operating procedures and other relevant issues.

The government in the Budget for 2016-17 had proposed 1 per cent excise duty on jewellery without input credit or 12.5 per cent with input tax credit on jewellery excluding silver other than studded with diamonds and some other precious stones.