15 October 2015: Vodafone India, one of India’s leading telecommunications service providers, today announced the launch of Superfast 3G services on its own network in Tumkur. With this move, 0.3 million citizens of Tumkur (as per Census 2011 data) will be able to experience Vodafone 3G services, now even faster, smarter and better than the existing speed and connectivity. Apart from Tumkur, Madikeri and Chitradurga too have now moved to Vodafone's own 3G network. 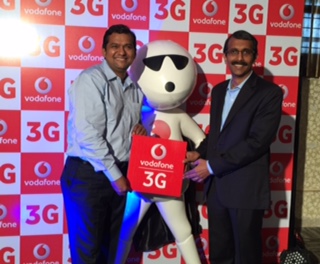 Commenting on the launch of its own 3G network in Tumkur, Suresh Kumar, Operations Director - South, Vodafone India said, “Starting with Tumkur today, Vodafone will roll out its own 3G network in a phased manner across Karnataka Circle. With this launch our valued customers across the state can now avail of faster, smarter, better speeds and superior data browsing experience at the existing 3G tariffs. We are confident that with the launch of our own 3G network, customers will experience superfast internet experience on the go and this will facilitate faster mobile internet adoption.

Currently, Vodafone has been offering 3G services in Karnataka circle via Intra Circle Roaming (ICR) agreements. As part of the launch, Vodafone Karnataka will be offering a special free trial pack of 100 MB 3G Data for 1 day in these three towns. Vodafone India has more than 7.45 million customers in Karnataka Circle with 58% being data users.

As part of its strategy to democratize data, Vodafone India has been focusing on closer engagement with customers to use mobile internet, and educating current and potential users about how internet can add significant value to them.