Manipal: From an extremely shy and introvert kid, Dilip Chhabria grew up to become a legendary car designer. “Everything we do has to have the wow factor,” DC, as he is popularly known, told a packed Chaitya Hall of students and faculty here on Friday. 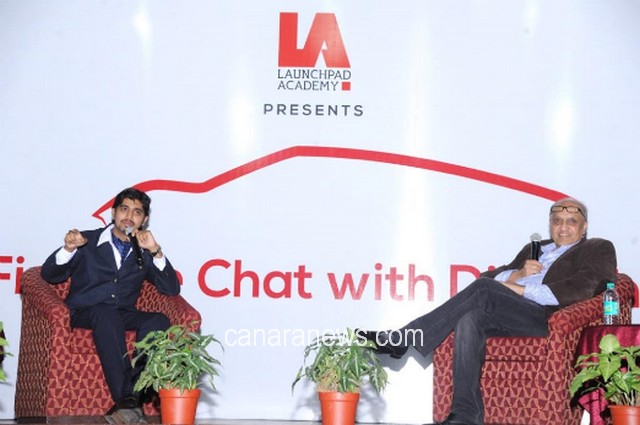 In a Fireside chat with him, organized by The Think Tank of Manipal Institute of Technology, Manipal University, DC did not fight shy of telling everything about himself – his story from early childhood to the present day. The host of the show, Suhas Kaushik, did an exceedingly good job to elicit even small details to wows and thunderous cheers from students.

About two hours of free wheeling chat may have appeared a trifle less at the end of it all. But the wealth of information he gave in that time was inspirational to the students, who had plenty to take back from the chat with the auto guru. The story of how DC fashioned his life as told to the students, despite twists and turns early on, was amazing. And, how he pursued his passion with dogged determination to become a car designer par excellence was mind-blowing. Designing cars and making changes in designs is his passion, hobby and work.

In a power point presentation, DC showed some of the models he has designed through the years. In the 22 years of his company’s existence, he has designed over 3000 cars. “From making accessories to designing a whole car was an ever-present passion in me. So I started DC Design in 1993.

“In my vision statement, the essence was that if I could create an organization that could give design services to Indian or foreign companies at Indian cost, how can it fail? More so when we were able to create differentiated designs. I had the conviction then that each one of us individuals are incoded to expect change. You want something new every day in your life. So I realized that is omnipresent in every human being and if I could deliver that in the automobile industry the company would survive. Also, designing in India was much cheaper. Perhaps, one-tenth the cost. So that’s the reason why I started my own company,” he said.

He went on to add, “My work spoke for itself and I had a contract from Mahindras to start with and they locked me down for the first two years. Then we never looked back. The word spread around in the industry and everywhere. There is this new kid on the block, people would say. I drove my own car which I customized and it sure was a head turner. Success came early to me and I’ve enjoyed my journey”.
He advised students to have a conviction. “It is a very important fact that all of you must imbibe. All of you must have a conviction in what you are doing.” He also said, “You have to be knowledgeable about what you are going to do. You have to extrapolate the future with the past and know what the outcome could be. You have to be learned in the profession. You cannot be superfluous”.

Director MIT, Dr G.K. Prabhu welcomed the gathering and Chief Guest, Dr H. Vinod Bhat, Vice Chancellor Manipal University gave his impressions of the program and congratulated The Think Tank for organizing the event, which was new to the University. Faculty adviser, Dr Raghu A Radhakrishnan, Deputy Director Research Health Science gave the vote of thanks.