Mangaluru: Dakshina Kannada Zilla Panchayat Chief Executive Officers (CEO) P I Sreevidya has been transferred on Thursday, as the Deputy Secretary of Infrastructure Development Department, Bengaluru. Sreevidhya was serving as the chief executive officer in Dakshina Kannada for over one year, after taking charge on March 4, 2015. 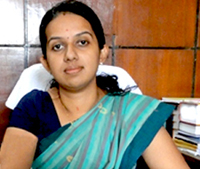 P.I. Shreevidya is an IAS officer of the 2009 batch who emerged as one of the toppers of her batch by securing the 14th rank. She hails from a village called Kottarakara in Kollam district of the neighbouring state of Kerala. After her initial education in a government school, Sreevidya did her B.A in English literature from Mar Ivanios College. She later pursued law in Kerala Law Academy and came out in flying colours by securing first class.

After her success in IAS exams, Sreevidya first served as CEO of Madikeri Zilla Panchayat. She has also served Sakleshpur as Assistant Commissioner. She has even worked in Udupi for some time.