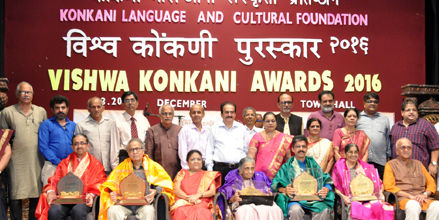 Each of these five awards consisted of Rs 1 lac cash with citation, shawl and memento.

Delivering the keynote address chairman of Manipal Global Education, Mohandas Pai said, "Konkani-speaking people constitute about 25 lac of the 129 crore population of the country. So when it comes to numbers we are a microscopic community. Our true assets are education and the rich culture we inherit. If we do not honour the writers and artisans, there is a danger that all the art and culture might become extinct in the next 15-20 years. Our religious and regional differences are minor, we must come together and work as one to preserve our culture."

In her presidential address, president of Kannada Sahitya Academy Malathi Pattanashetty said that honouring artistes and achievers was the need of the hour. "The achievers, the writers and the artisans do not work for awards. If they do so, it affects their creativity. The work of Vishwa Konkani Kendra in this recognizing achievers is appreciable," she said

All the recipients of the awards thanked the Vishwa Konkani Kendra and Konkani Language and Cultural Foundation for the honours.

Poet Melvyn Rodrigues compared the joy of receiving the award to the joy of eating tender coconut in the kitchen when his mother was not watching. "The coconut in old times was kept in the kitchen so that it could not be eaten by the mice or insects. As children, when no one’s around, we made a bid to eat it and also the jaggery along with water. Such is the joy in my heart today," he said.

Bhaskar Kogga Kamath of Uppinakudru puppets fame said that even though he has performed puppet shows in more than twenty countries, this was one of his most joyous occasions. "This art has spread for over 350 years since my forefathers, and I belong to the sixth generation. I feel proud to be a Konkani-speaking GSB," he said.