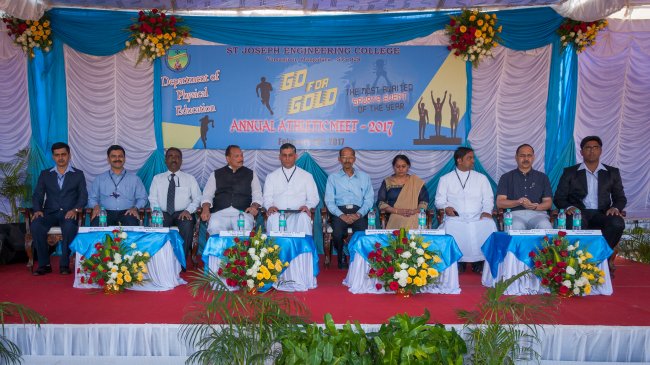 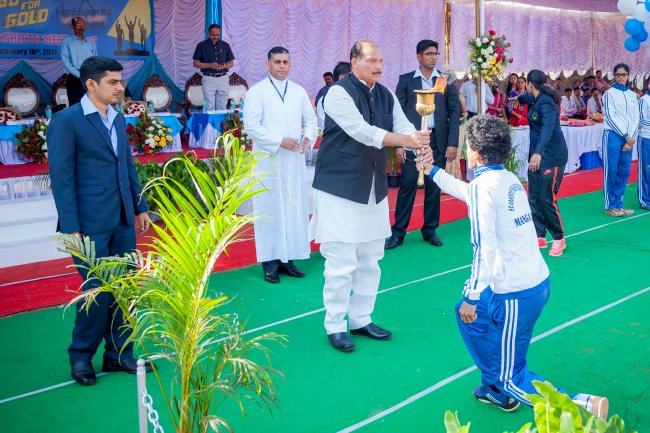 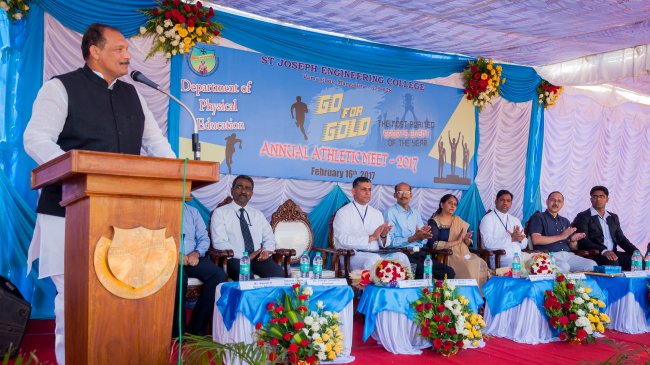 Peter and Mary Mascarenhas, parents of late Princia Mascarenhas, were the guests of honour for the inaugural ceremony. Ivan D’Souza, MLC and chief whip of Karnataka legislative council was the chief guest for the programme. The programme was presided by Fr Joseph Lobo director of SJEC.

The sports day commenced with the beautiful march past by the students to the beats of St Raymond School Band. More than 2500 students participated in the march past class wise, dressed in their class jerseys. Joyal Tauro, a fourth year student and captain of SJEC Athletic Team led the March Past. Fourth year students, and Athlete and Volleyball players Saleeka Shama (E and C), Vijethraj (E and C), Lourina D’Sa ( Mech), along with athlete and Shuttle Badminton player Faheem ( Mech ) marched with the college flag held high. All classes comprising MBA, MCA, BE and the East Timor students followed them.

The torch was handed over to the chief guest to declare the meet open. Balloons were released by the guests and the top athletes of SJEC.

Declaring the meet open, Ivan D’Souza in his address spoke to the students about the importance of sports and how it helps develop courage and strength in the face of challenges. Drawing from his own experiences, he pointed to the relevance of sports and games in an individual’s success and drew a link to the growth of the nation.

An athlete and fourth-year student (Mech) Chrisel Pais took the oath on behalf of all the participants. As a mark of celebration, ten Kadina traditional crackers were lit out.

Vice principal Dr Rio D’Souza was the chief guest for the closing ceremony of the meet. Alister Dsouza, chairperson of Sports Committee welcomed the gathering. Fr Rohit D’Costa asst director of SJEC presided over the function. Physical director Vaneesha V Rodrigues proposed the vote of thanks and Nithin Heraje conducted the prize distribution ceremony. The college flag was lowered and the meet was declared closed and concluded with the College Anthem.