Inauguration of 22nd Tulu Parba at the Karnataka Sangha Auditorium

Mumbai, Mar 28: Tulu Parba exhibits the culture, samskara, tradition of Tulunadu. We should pass on Tulu to the next generation by not speaking any other language except Tulu at home. Tulu language is associated with agriculture. Slowly we progressed to see horticulture in place of agriculture, then civilization and now because of civilization we can see Tulu nowhere. We have lost our existence because of WTO. This can be saved by literature. Tulu language lacks royal support-said senior writer Dr Vasant Kumar Perla.

Erya Laxminarayana Alva said that Tulu is a mature and strong language. We are slaves of English language. Programmes like Tulu Parba help us to save our language.

Nithyananda D. Kotian – the president of Billawa Association Mumbai welcomed the gathering. H. B. L. Rao – the president of Sahitya Balaga delivered the introductory speech. Petemane Prakash Shetty introduced the guests and presented the programme. S. K. Sundar proposed the vote of thanks. 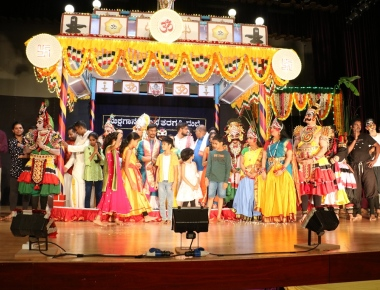