Nama Tuluveru one of the socio supporter who has successfully hosted several programmes throughout in the past supporting Tulu language and culture in this part of the world; including one of the most classical presentation of 'Tuluvere Parba 2012' conducted in conjunction with various community groups which proved to be an really extravaganza joint community charity event ever presented with many firsts to its record in UAE.

This time Nama Tuluveru in association with Rythm Events will be presenting 'Dhumbu Pira' yet another hilarious classic full comedy drama by the three times winner of 'Bhale Thelipale' drama contest, the one and only Kaup Ranga Tharanga Group lead by Samajaratna Kaup Leeladhar Shetty. 'Dhumbu Pira' had more than 100 shows in various parts of Karnataka and being acclaimed as one of the finest modern comedy drama of the year. Nama Tuluveru had earlier presented 'Aye Subhage' comedy drama of the same group which was also an successful houseful show applauded by all the drama lovers of UAE. Well known Film Stars of Tulu Cinema, Sandeep Shetty, Prasanna Bailur will be part of the troupe arriving from Mangalore.

A Press Release was held at Fortune Plaza Hotel, Ghusais, Dubai today the 17th of February, 2016 wherein Members of various medias, Well Wishers, Sponsors & Members of Nama Tuluveru under the leadership of Deepak S.P. & Ajmal Sayyed gathered and released the invitation booking coupons to the public. The booking coupons will be later exchanged with the DTCM tickets once received.

The drama is scheduled to be held on Friday the 4th March, 2016 at 6 PM sharp in Sheikh Rashid Auditorium, The Indian School Dubai with the support of Rythm Events. Very many dignitaries and well known different community leaders will arrive to grace this occasion.

Land Traders Mangalore will be the Main Sponsor of the event, supported by Core Elements as Stage Partner, Fortune Group of Hotels (A Praveen Shetty Enterprise) as Hospitality Sponsor, Shaan Tours as Travel Sponsor, Radio Spice 105.4 FM as Radio Parnter, Broadway Events with Sound & Lights. Well supported by all the Medias Groups and various Mangalorean Associations in UAE 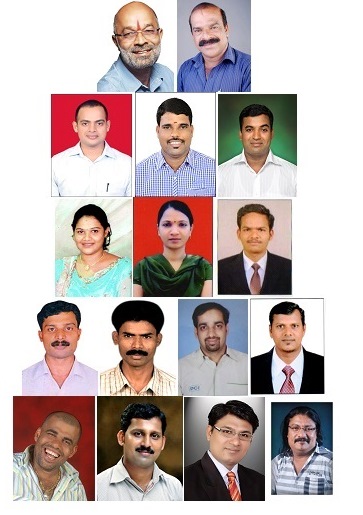 Nama Tuluveru has always presented successful shows and this time too guarantees one of the best shows ever presented. The conveners have requested all the drama lovers of UAE to mark your diaries for this show and make this event a successful one. This will be an unique modern full comedy drama which for sure will tickle your rib bones throughout and make you fall out of your seats with laughter.

Ticket booking can be availed at the following places:

Booking can also be done online by clicking https://goo.gl/mY7j4u