Mumbai (The Hindu): Elections being seen as a test of strength for BJP in State after 2014 victory. The State Election Commission (SEC) said a turnout of 70 per cent was recorded on Sunday as over 58.49 lakh voters, a majority of them from rural areas, exercised their franchise on Sunday to elect presidents and councillors to 147 municipal councils. 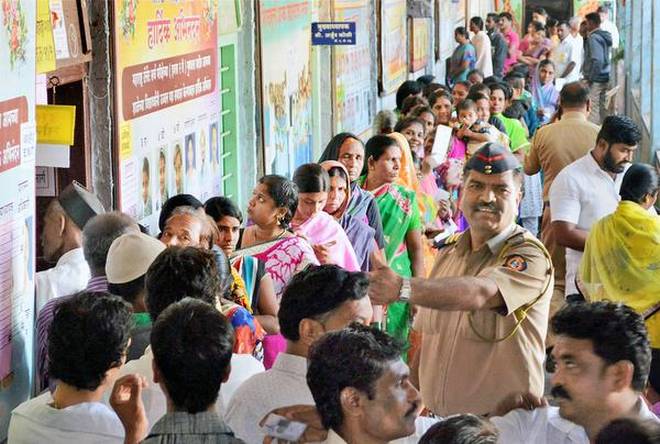 The civic elections are being seen as a test for the BJP-led State government and its alliance partner Shiv Sena, as this will be the first elections in the State since the combine came to power in October 2014. Till Saturday, the SEC had seized cash worth Rs. 26 crore and close to 1.24 lakh litres of illicit liquor from 19 poll-bound districts.

“The BJP governments at the State and the Centre have begun implementing developmental schemes. The people should chose BJP even at the local level to ensure the development schemes are implemented effectively,” State BJP chief Raosaheb Danve said. The Sena and the BJP have said they are contesting the polls in alliance, results to which will be declared on Monday.

An analysis of 639 candidates’ affidavits by the Association for Democratic Reforms (ADR) and the Maharashtra Election Watch show average assets of around Rs. 1 crore but 22 per cent, or 142 of them, are crorepatis. A similar analysis for the councillors’ elections to 164 municipal councils show that the 9,495 candidates contesting the polls have assets averaging around Rs. 36 lakh, but eight per cent, or 743 candidates, are crorepatis.

Among those contesting for president’s posts, Vedantikaraje Shivendrsinh Bhosle of the Satara Municipal Council tops the list of wealthiest candidates with assets of around Rs. 71 crore. Around 26 candidates have declared zero assets; excluding them, only 107 have assets of less than Rs. 2 lakh. Madhubala Bhosale from the Phaltan Municipal Council tops the chart among councillors with assets of around Rs. 46 crore. In these polls, 397 candidates have declared zero assets while 1,186 have assets worth less than Rs. 50,000.