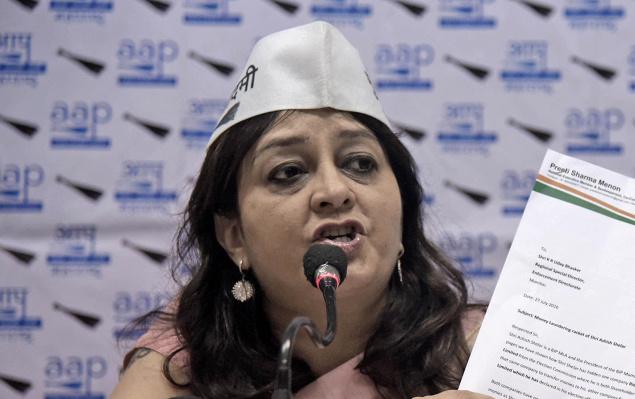 In a media conference, Ms. Menon said that Mr. Shelar’s company Sarveshwar Logistics Private Limited, formed in 2010 with two other directors, had accumulated money through dubious sources and acquired property worth Rs 18 crore in five years despite no visible business transactions, and paltry revenue. She said that Sarveshwar Logistics had received Rs. 3.6 crore in share application money, Rs. 26 lakh in loans and advances, and had purchased property worth Rs. 3 crore. It had also received an unsecured loan of Rs. 6 crore without collateral, and despite the lack of a business model. Ms. Menon said that based on documents obtained from the Registrar of Companies (ROC), “In 2014-15, the company’s Long Term Borrowings stood at Rs. 14.24 crore, and [it] owned property worth Rs. 18.46 crore, while its balance sheet showed no business transactions and no revenues.”

Ms. Menon said that in Mr. Shelar’s 2014 election affidavit, he had concealed the fact that he was a director with another company, Riddhi Dealmark Private Limited registered in Kolkata. The documents showed that the original Kolkata-based directors of the company, Premnath Mali and Jitendra Chaudhary, had sold their shares to Mr. Shelar and his personal assistant Prakash Patil within a month of the registration, and the company received Rs. 20 lakh as share application money. “Riddhi’s balance sheets obtained from ROC show that in the next year, this Rs. 20 Lakh was invested in Mr. Shelar’s other company, Sarveshwar Logistics. However, there is no record of the Rs 20 lakh in Sarveshwar’s balance sheets.”

The AAP leader also said the documents show that in 2014, the annual general meetings of both companies were held on the same dates in Kolkata and in Belapur, Navi Mumbai, and the director’s report showed that Mr. Shelar was present for both the meetings simultaneously. Ms. Menon added that Prakash Patil is also a co-director in Alhad Properties Private Limited, where Sunil Parab, Mr. Shelar’s former PA, is the other co-director. “In this company too, the original directors changed in seven months and were replaced by Patil and Parab, and despite zero turnover, the company had obtained an unsecured loan of Rs 3 crore.”

“These are clear cases of money laundering, Ms. Menon concluded, “Mr. Ashish Shelar has concealed his ownership in a company based in Kolkata, the company has received share application money at a huge premium, from dubious sources. This money has been moved to Shelar’s declared company Sarveshwar, which has received many larger sums from unidentified sources. All the money is used to create property. This was exactly the same modus operandi used by Chhagan Bhujbal with high value shares coming through the Kolkata model, of benami companies into a company with no turnover and no operations.”