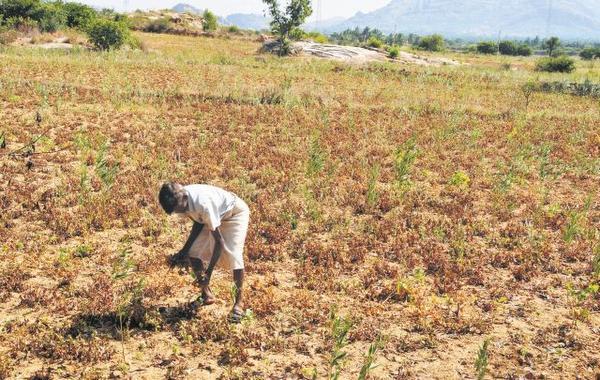 Lakhs of farmers, who are already reeling from drought and crop failure, have reportedly missed the deadline to avail themselves of the scheme, which ended on November 9. The worst hit are the horticultural farmers. Though the deadline was extended to November 10, most of them missed the deadline to pay the premium as they were unable to withdraw cash from banks. On November 12, the State government held an urgent meeting with registered insurance companies to help farmers avail themselves of the scheme.

A senior government official said, “The scheme applies to Kharif, Rabi and horticultural farmers. While the former two have mostly enrolled themselves within the October 31 deadline, horticultural farmers have missed it. Most of them had old currency notes and could not exchange them in banks owing to long queues.”

The failure to include all farmers in the scheme could have far-reaching impacts. The scheme might not achieve its ambitious target of increasing crop area from the existing 23 per cent to 50 per cent of the gross cropped area in three years. Eight five lakh farmers are part of the scheme. Since 2000, the State government has been giving out crop insurance. Officials said over the past five years, an average of Rs. 900 crore has been doled out every year. The deadline of scheme was extended from August 2 owing to delay in shortlisting the insurance company. The Opposition has criticised the government for the delay and not ridding the scheme of its inherent flaws.

Shankar Dhondge, former MLA and national president of the Nationalist Congress Party’s Rashtravadi Shetkari Sabha, said, “There is a basic flaw in the crop insurance: it doesn’t compensate farmers in accordance to the area destroyed. Meanwhile, there is chaos at the banks and the government has not given priority to farmers.” Mr. Dhondge alleged that there was a scam in the registration of insurance companies and the data list of the beneficiaries was being tampered with.

The limited availability of cash following the demonetisation of Rs. 500 and Rs. 1,000 notes has crippled the transportation of goods to and from agricultural produce market committees (APMC).

While truck drivers transport produce from the farm to the market, porters help the traders move the goods from the trucks. Sanjay Pansare, a fruit trader, said, “To rent a truck hailing from Kashmir one has to pay Rs. 80,000 to 1 lakh every day. The truck drivers don’t accept payment only in cash. We are not able to afford transportation costs.”

Nanasaheb Patil, former chairman of Lasalgaon APMC, “How far can you stretch the credit game? It might be a bit easy in urban areas, but it has turned disastrous in rural areas. You have to pay in cash and there is absolutely no alternative.”

Rajan Kshirsagar, an activist of the agricultural labour union from Parbhani, said porters at the APMCs are also affected. “They either have no work or are paid an awfully less amount of money.”

According to government sources, market committees in Mumbai are the least affected. An official said, “We do not see major problem at present. Else, there would have been a price hike in vegetables and other commodities. We hope the situation will get better.” - Staff Reporter