Mumbai (The Hindu): The accident, yet another in a long string of mishaps on the expessway, occurred at around 5.30 a.m.

At least 17 people, including an infant, were killed and 50 others injured in an accident involving a luxury bus and two private cars on the Mumbai-Pune Expressway (E-way) near Panvel on Sunday morning. Ten of the dead were from Mumbai and Thane, and the rest from Satara. 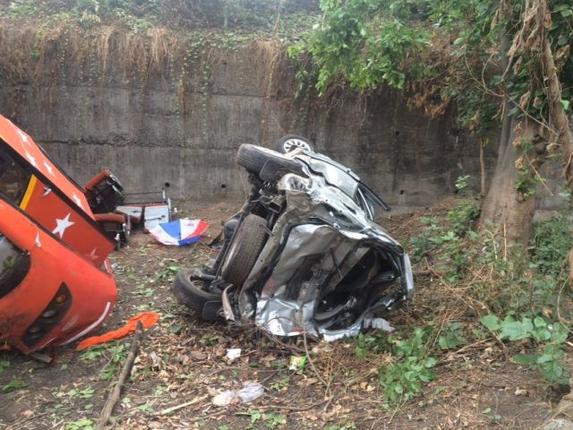 According to the highway police, a Maruti Swift stopped on the side of the E-way near Shendug curve to replace a flat tyre. A Toyota Innova stopped on the first lane to help the driver of the Swift. A luxury bus, coming at top speed from Satara, rammed into both cars before crashing into a 20-foot ditch on the left side of the E-way, killing 17 people, including a six-month-old baby, on the spot.

The accident occurred at around 5.30 a.m. on Sunday, and has once again raised concerns about the speed and driving discipline on the E-way. Police and rescue teams rushed to the spot, by now covered with shattered glass from the three vehicles which were a mass of mangled metal.

Could have been averted

According to police sources, the disaster could have been averted if the driver of the Swift car had switched on the parking lights while fixing the flat tyre.

“The bus coming from the direction of Satara failed to spot the cars. He lost control of the vehicle when he tried to swerve onto the second lane on spotting the car. It was cloudy this morning which further aggravated the situation for the bus driver,” DCP (Zone-2), Panvel division, Vishwas Pandhare, told The Hindu.

The injured were shifted to MGM and Ashtavinayak hospitals in Navi Mumbai. Of the 50 injured, 29 travellers are from Mumbai, Thane and Navi Mumbai.

The E-way has seen a spate of accidents last month. On May 27, Pune-based real estate developer D.S. Kulkarni, chairman and managing director of the DSK Group, had a narrow escape when his Toyota Land Cruiser rammed into a trailer on the Mumbai-Pune expressway, killing his driver instantly.