Malwani triple murder: killers were after cupboard full of cash

Mumbai (The Hindu): One of the accused trio was injured when a victim resisted and was operated upon in Gujarat

The interrogation of the three accused in the Malwani triple murder case has revealed that the alleged killers of Babli Shaw and her two grandchildren were nabbed in Gujarat while on their way to Ajmer to “seek forgiveness for their sins during Ramzan”. 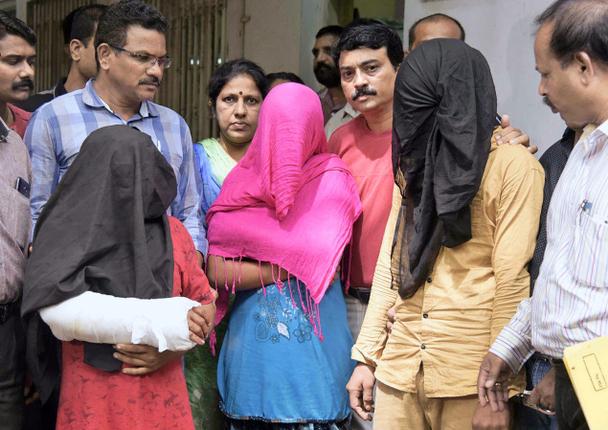 Police said Sabina Shaikh, her live-in partner Sultan and their associate Mufit were arrested from a civic hospital in Valsad, where Sultan was being treated for a bad cut on his arm inflicted in the struggle with Ms. Shaw before she was killed.

A team from the city police crime branch’s Unit 11 had tracked the trio to the neighbouring state through their mobile call records.

Officers involved in the investigation said the police had picked up three pieces of vital information while conducting the panchnama at Ms. Shaw’s residence: there were traces of blood from four people at the crime scene including that of one of the accused on a window pane, a cupboard stuffed with cash, and a mezzanine floor with a bed and curtains.

Neighbours revealed to the police that Ms. Shaw was running a prostitution racket from the room on the mezzanine floor between 12 pm and 6 pm when her grandchildren Aryan, 13, and Sanya, 8, were out to school, and between 12 am and 6 am when they were asleep. They also said that on the night she was murdered, Ms. Shaw had opened her main door at 12.30 am to let in three people.

Ms. Shaw, it was found, had two numbers, one of which had been disconnected in June. The call records for this number threw up the phone numbers of a Sabina and a Mufit, both of whom had called her.

While several police teams were formed and sent out to Gujarat, Rajasthan, Madhya Pradesh and other states, police tracked Sabina and Mufit’s numbers to a government-run hospital in Valsad. According to the police, Sabina confessed to the crime and said she and Sultan had planned Ms. Shaw’s murder.

She added that she would rent the room in Ms. Shaw’s house for Rs. 1,200, of which she would be paid Rs. 400. Sabina also told the police that she noticed the large amount of cash in Ms. Shaw’s cupboard and hatched the plot with Sultan. The couple planned to move to her village with the stolen cash. To facilitate their plan, they included Mufit, who called Ms. Shaw asking to rent the room.

The trio reached Ms. Shaw’s house at 12.30 a.m. and went straight to the rented room on the mezzanine floor, where they waited for her to fall asleep. After ascertaining that Ms. Shaw had gone off to sleep, they descended to the ground floor at 2.30 a.m. While Sabina kept a watch on the door, Mufit and Sultan held her arms and stabbed her. A panic-stricken Ms. Shaw tried to resist and pushed Sultan, due to which the knife he was carrying accidentally cut open a vein in his arm. When sounds of struggle woke Sanya, Sultan and Mufit killed her and then murdered Aryan, who was asleep next to her.

The trio then tried to open the cupboard containing the money, but were unable to do so despite over 30 minutes of efforts. Finally, they had to give up as Sultan had lost a lot of blood from the cut and was in pain. They left the house went to a railway station, where they boarded a train to Valsad. There, they approached a civic hospital where Sultan underwent a surgery. They were set to leave for Ajmer when the police caught up with them.

Shashikant Satav, DCP (Crime), said, “They said they were headed to Ajmer dargah to pray for forgiveness for their sins. We are now taking down neighbours’ statements to find out whether anyone had heard sounds of struggle, or if the victims had been killed in their sleep. We are also interested to know if the victims knew all their killers.”

Police said Ms. Shaw’s daughter, who died a few years ago, had married into a different community. After her divorce, she and her children began staying with Ms. Shaw in Malwani. They added that Ms. Shaw owned two houses in Mumbai and property in her village as well, and the property angle is being investigated.