Mumbai (The Hindu): Rain in Latur, Osmanabad, Beed and Solapur districts leads to overflowing dams. Heavy downpour for the past 48 hours has caused flash floods in at least four districts of Marathwada in Maharashtra, throwing the traffic awry and spurring disaster response teams to rush to the area. 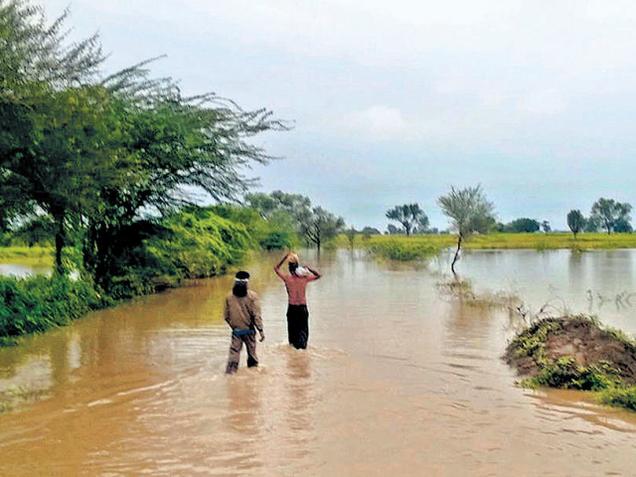 Relentless rain in Latur, Osmanabad, Beed and Solapur districts led to overflowing dams in the region opening their sluice gates on Sunday.

In Osmanabad, four gates of the Sina Kolegaon dam were opened after the danger mark had been crossed, while the earth-fill Chandani dam was reported to be overflowing. The Terna dam, sited in the same district, was reportedly overflowing for the first time since 2010.

Eleven gates of the Majalgaon dam in Beed district were opened to drain out the excess water.

According to reports, four people were stranded in a village in Osmanabad’s Lohara Taluk. Units of the National Disaster Response Force (NDRF) rescued 11 people trapped in Latur’s Mawalgaon village, said sources. Since Saturday evening, NDRF jawans have succeeded in rescuing more than 45 persons cut off in villages in Latur and Nanded districts.

The raging flood waters threw public transport out of gear, disrupting communication and rendering many highways ineffectual for commute.

Most of the roads in the region became totally cut-off after 2 p.m., with the waters rendering the Latur-Tuljapur road unusable for traffic. This has caused severe inconvenience to devotees travelling to the Tulja Devi shrine in Osmanabad.

Highway traffic hit
Massive traffic snarls were witnessed along the length of the National Highway 211 connecting Aurangabad district with Solapur.

The floods have ravaged crops and battered livestock in some parts of Solapur district, said reports, although the extent of damage is yet to be ascertained.