Mumbai (The Hindu): Opposition parties, including the Congress, Nationalist Congress Party (NCP), and the Aam Aadmi Party (AAP) on Wednesday lashed out at the Bhartiya Janata Party (BJP) after reports emerged that Cabinet Minister Pankaja Munde had close ties with a scam-tainted road contractor. They demanded that the probe in the matter be handed over to a Central agency. 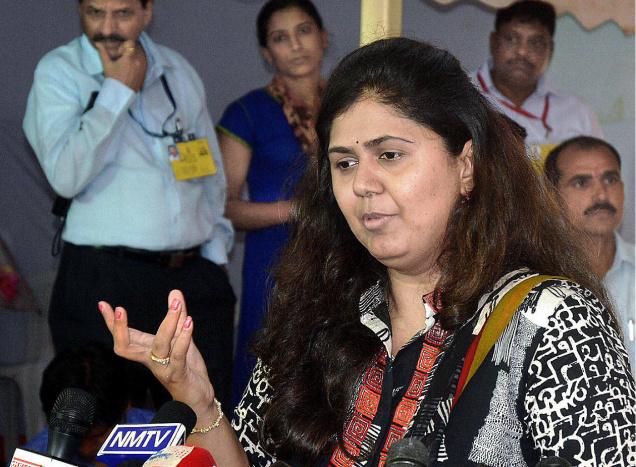 “Narendra Modi has adroitly bluffed India; Bhrastachar Janta Party (BJP) is looting treasuries all over the country. This is an alleged massive scam in Maharashtra,” tweeted Sanjay Jha, national spokesperson of the Congress.

An investigation by The Hindu had shown that Ms. Munde terminated her four-year partnership with Supra Media Services LLP, immediately after the BMC registered an FIR against the six contractors. On June 17, a day after the police arrested 10 people in the scam, Mr. Palwe, too, resigned from the LLP. Soon after, Ms. Munde cut off all ties with Supra Publicity Private Limited, the parent company of the LLP.

Meanwhile, Ms. Munde denied having any links with RPS: “Linking my family with other business interests of one of the partners is injustice to me and my family. I wonder who feeds such news items; I was not even a minister when this happened. I have never ever met the mayor or any Sena leader for road contracts. Not a single rupee transaction took place in the company formed with the person involved in the road scam; Chief Minister Devendra Fadnavis is aware of all the facts,” she told the media.

The NCP demanded that Chief Minister hand over the probe of the road scam to the Central Bureau of Investigation, with a clear case of conflict of interest emerging with one of BJP senior ministers.

“This is a clear case of conflict of interest and we will raise this in the house; the minister was am equal liability partner in the firm having a link with the tainted contractor,” said party spokesperson Nawab Malik.

Mr. Palwe said there was not a single rupee exchanged with RPS or a work executed. “It is true we were in a partnership, but it is wrong to do any business as a politician. A picture is being painted that we were part of the scam, which is not true.”