Mumbai: Parents of children studying in eight private schools gathered at Azad Maidan on Thursday to protest excessive fee hikes at schools. “Every year, the fee goes up by between 10% and 12%, but there is no corresponding improvement in facilities,” said Suman Shetty, whose children study in Class I and IV at Universal High School, Dahisar. She is also a member of the Parent-Teachers Association of the school. 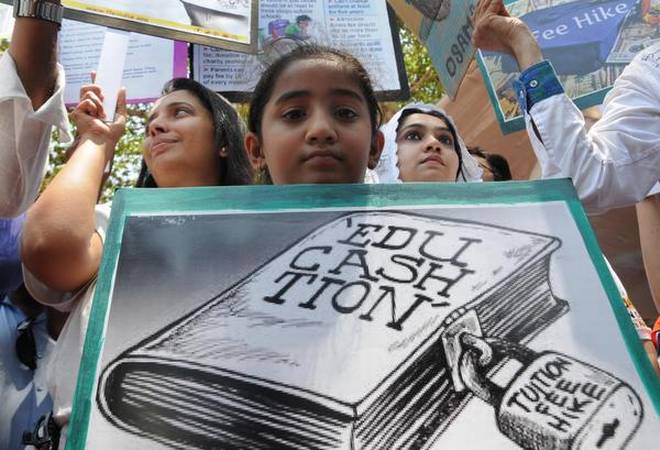 “Unlike what was promised, there has been no space constructed for judo, dance or skating. The school management never held meetings with the PTA, but called us each individually. We also asked for break-up of the additional fees demanded, but it took the school 6 months to furnish this, and they charged excessive rates for notebooks — ?20 for a 45-page notebook, when outside in the market you can get a 100-page notebook for ?10,” she said.

“Yesterday, a group of parents met Education Minister Vinod Tawde for a resolution of this issue. He has asked an education officer to visit our school. However, school management maintained that yearly hikes were valid, even though Mr. Tawde said there can be a hike only every second year,” she said.

Another parent at Universal High, who did not wish to be named, said that participating in the protest was perhaps not effectual, but she could not pay fees blindly. “As it is, we are used to signing forms schools send us without reading them properly. But that has to stop now. We don’t want to fight, but we also can’t give schools our money blindly,” she said.

“In the past 6 years, the annual fee has doubled,” said a parent from Vibyor High School, Malad. “Now, my child is in Class V and I pay over a lakh. Annual charges for infrastructure come up to ?40,000 but children have to climb up four flights of stairs every day as the lift isn’t working. That is just one example.”

“School management often tells us that we can afford fee hikes because our salaries are increased every year too. But we do not get 20% salary hikes. Our income remains the same and our school expenses just keep increasing. We have to sacrifice on several things — like enrolling children in extracurricular classes, or taking them on trips for fun or education,” said Shobha Mishra, parent at Bal Bharti Public School, Kharghar.

While fee hikes have become routine every year, this is the first time an organised protest has been held, parents said. They have demanded a cap on private school fees, similar to the Bill recently introduced by the Gujarat Assembly, and greater accountability of school management.