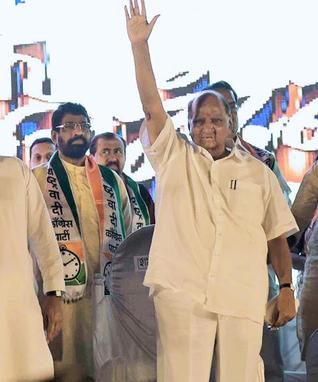 He said, “According to the Reserve Bank of India, only notes worth Rs. 400 crore of the total Rs. 17 lakh crore are fake, which means only 0.28 per cent notes are fake. Despite this, 86 per cent notes were demonetised to get rid of the 0.28-per cent fake notes. The government has added to the problems of the common people, and our Prime Minister is claiming that black money hoarders have lost their sleep.”

Claiming that such developments will pose a danger to citizens, Mr. Pawar said parivartan (change) is the only option in the upcoming Lok Sabha and Assembly polls as well. Earlier last week, Mr. Pawar had welcomed demonetisation. “If a rich person has committed a mistake, then hang him. But do not put the poor, common man in trouble by terming his honest money as black money. If the head of the country is portraying this country as one of criminals, then it is our responsibility to prove that this nation belongs to hard workers and labourers,” he said, adding that people will teach ruling party leaders a lesson when they come asking for votes.

The NCP chief also ridiculed the Rs. 98,000-crore Bullet Train project, saying Mr. Modi is in a hurry to reach Ahmedabad. “If this much of money is utilised in the right place, Mumbai, Delhi, Chennai and Kolkata will get better local trains. If you do not spend money to improve Mumbai’s transport, problems will only increase. Citizens of Mumbai must decide to sideline those who are trying to harm their interests,” he said.