Mumbai, (The Hindu): Heavy rainfall continued to lash Mumbai for the fourth day on Tuesday with the India Meteorological Department’s (IMD) Santacruz and Colaba stations recording 190.9 mm and 116.4 mm of rainfall respectively between 8.30 a.m. on Monday and 2.30 p.m. on Tuesday. 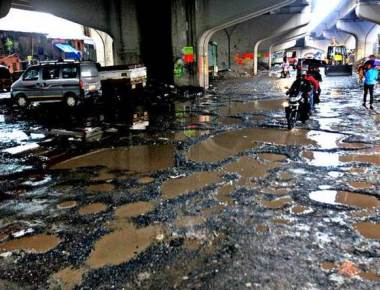 Intermittent rainfall is forecast in the city and its suburbs, and heavy rain in expected in certain areas, in the next 24 hours. Skymet Weather, a private forecaster, in a report has said that the heavy rainfall is a result of the off-shore trough running along the West Coast from Gujarat to Kerala. The report says, “A cyclonic circulation also persists over the Gujarat region which has been feeding moisture over the region of Mumbai resulting in good rains.”

Meanwhile, Skymet reported that in the past 24 hours, from 8.30 a.m. on Monday, Mumbai recorded a massive 163 mm rainfall. At its Santacruz observatory, 4 mm of rain was recorded and 107 mm was recorded at its Colaba observatory.

The lakes that cater to the city’s water needs are also filling up. After Modak Sagar breached its banks on Saturday, Tansa lake began overflowing at 4.55 p.m. on Tuesday. Reports from the Brihanmumbai Municipal Corporation said last year the lake had breached its banks only on August 2. A.S. Tawadia, hydraulic engineer of the BMC, said, “About 14,35,000 million litres of rainwater needs to accumulate in all seven lakes by the end of the monsoon to meet the water supply needs of the city for the rest of the year. About 71% of the required quantity has been filled by now.”

According to the BMC seven cases of short circuit were registered but no injuries were reported. The heavy rains also led to 15 trees being uprooted in the city, including three in the eastern suburbs and two in the western suburbs. Floodwaters inundated the roads and caused minor traffic snarls in the city. APS Tawade, Worli Traffic Police, said, “There were traffic snarls on Kherwadi Flyover as rain hampered efforts by BMC workers to fill a big ditch. The monsoon has not affected the flow of traffic in other parts of the city.”

The rains also delayed several local and long-distance trains in the morning hours. The local train service on Central Railway (CR) and Harbour Railway were operating with a delay of 15 to 20 minutes. The services on the Western Railway (WR) were operating with a delay of 5 to 10 minutes. No incident of water-logging on tracks was reported on both the railways. All Mumbai and Ahmedabad bound trains on WR were hit owing to the heavy rain between the Mumbai suburbs of Vapi and Valsad. At least seven to eight express and passenger trains have also been cancelled at various stations.

IMD-Pune has warned of heavy rainfall at isolated places in Konkan, Marathwada, central Maharashtra and Vidarbha. IMD-Mumbai, director, Sunil Kamble said, “The rainfall is of good intensity in last four days compared to that since June 1. The coastal Konkan region is having more showers in last four days as well. The rainfall in central parts of Maharashtra is on the lower side.”

The neighbouring areas of Mumbai such as Alibaug in Raigad district received 173 mm of rainfall, followed by Bhira getting 169 mm. Other parts such as Mahabaleshwar in Satara received 149 mm rains, while Ratnagiri received 130 mm rainfall in the last 24 hours. The forecast issued by the IMD on Monday afternoon said the rainfall would be “fairly widespread to widespread” over central Maharashtra, the foodgrain cultivating area, till Wednesday. Marathwada region will have widespread rainfall till Wednesday, while Konkan region will have heavy to very heavy rainfall at isolated places.

As per the data released by IMD, New Delhi, rainfall received across Maharashtra from June 1 to July 17 is “normal”, though actual precipitation is 381.1 mm as against the normal of 387.2 mm.