Mumbai (The Hindu): Shiv Sena leader Eknath Shinde on Wednesday set up a transit camp at the MIDC grounds in Thane, which can provide food, water, and beds to over 500 migrants from drought-hit Nanded. 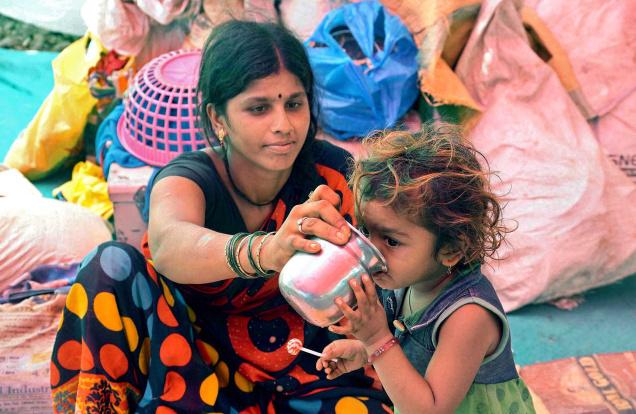 The Hindu had published a report on its Wednesday’s edition on the migration of farmers from Mukhed tehsil in Nanded district owing to water shortage. Mr Shinde, who is the Public Works Minister, and Thane’s guardian minister, met the migrants and took the initiative to move them to Thane. The camp, named after Sena founder Bal Thackeray, has been set up at the MIDC grounds in Wagle Estate area. Water tanks have been erected and a borewell for their daily needs has been identified in the area.

“After reading news reports, I met some of the families at Ghatkopar, and I was extremely moved by their living conditions. I discussed the issue with Sena president Uddhav Thackeray, and with the help of the Ghatkopar and Thane units of the Sena, we set up the camp. These people can now stay at the camp till the monsoon sets in,” Mr Shinde said.

Several parts of Marathawada and over 15,000 villages across the state are facing the worst drought this summer. Families from Mukhed told The Hindu that they have been migrating to Mumbai during the harsh summer for the last three years in search of water and employment.