Mumbai, (The Hindu): Posters announcing the Shiv Sena’s ‘Chalo Ayodhya, Chalo Varanasi’ campaign came up in different parts of the city on Thursday. This comes a day after the Sena president Uddhav Thackeray indicated his plans to visit Uttar Pradesh. 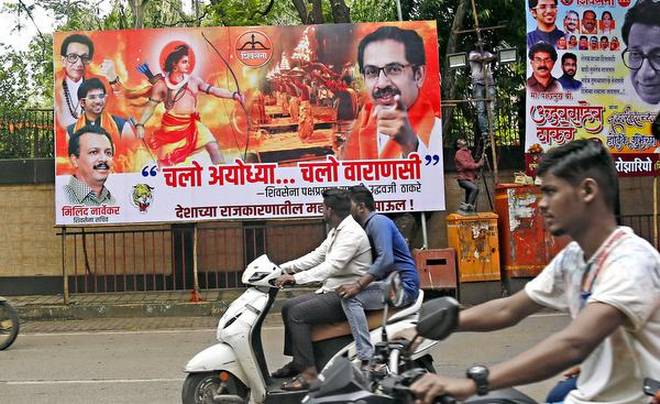 Varanasi is the Lok Sabha constituency of Prime Minister Narendra Modi, and the posters put up by party secretary Milind Narvekar are seen as the Sena’s attempt to take a dig at the PM, and also a strategy to invoke Hindutva prior to the elections.

The poster features a picture of Lord Ram carrying a bow and arrows, and a scene from the Ganga. The posters term this campaign a significant step in the country’s politics.

Mr. Narvekar, who rose in the party after being the given the responsibility of the personal assistant to Mr. Thackeray and was recently appointed as the secretary, is seen prominently in the poster, giving rise to the speculations about his possible electoral debut.

“I shall go to Varanasi, Kashi, take part in the Ganga aarti, and inspect how clean the Ganga has now become... I shall go to Ayodhya for a darshan of Ram Lalla, and pray at the temple,” Mr. Thackeray said during the course of his three-part interview in the party mouthpiece Saamana.

Stating that the Ram temple issue would be exploited in 2019 by the Bharatiya Janata Party, he said, “Lord Ram’s exile is not yet over. The BJP said work on the Ram temple at Ayodhya will start soon, but nobody really knows when... This means the Ram temple card will be played again during the elections.”

The Opposition taunted the Sena on posters. “Now that the Sena is talking about Hindutva, it seems the elections are near,” Maharashtra Congress committee president Ashok Chavan said. Mr. Narvekar could not be reached despite several attempts.