This Ganeshotsav, drones to monitor immersion

The city police will be stepping up security during the 10-day Ganeshotsav that begins on Monday by deploying drones at four prominent idol immersion spots. Traffic movement will be blocked on 49 roads, and one-way traffic will be imposed on 55 roads during the annual festival, police said on Wednesday. 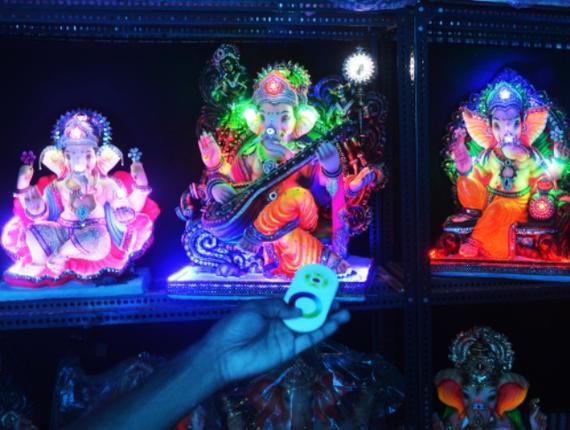 The deployment of drones will be a first for Mumbai police, after its experiment with the unmanned aerial vehicles during the Ganesh festival immersion last year had proved successful. The drones, police said, will help them keep a check on law and order situations in spots thronged by large crowds of festival-goers.

This year, drones will monitor immersion proceedings at Malwani and the Shivaji Park, Girgaum and Juhu Chowpattys. Ganpati mandals have also been briefed on security measures to be followed, including installing CCTV camera systems linked to police control rooms.

To ensure smooth flow of traffic, police have put together a 15,000-strong team that includes volunteers, paramilitary and police personnel to be deployed across the city. Restrictions on vehicular movement have been imposed in various areas of the city and suburbs, with 49 roads being closed off completely for four days between September 6 and September 15. Among these, 21 are from south Mumbai, 20 from the eastern suburbs and eight are from the western suburbs.

On these four days, 55 roads will follow the one-way norm, 18 will be closed to goods vehicles except those carrying Ganpati idols, and 99 roads will have parking restrictions.

To supervise vehicular and pedestrian traffic, five traffic police control rooms are being set up at Girgaum Chowpatty, Shivaji Park Chowpatty, Bada Masjid in Bandra, Juhu Chowpatty and Powai (Ganesh Ghat). In addition to this, watchtowers are being erected at various places and cranes will be stationed alongside.

"This year’s figure could increase by two per cent. We have had a meeting with organisers of all mandals and have briefed them about the security measures they need to take. The police are already prepared.”

Don’t use Shivaji Park for parking from 2017: HC
The Bombay High Court on Wednesday said it wants the state government and the BMC to not allow parking of vehicles at Shivaji Park during Ganeshotsav from next year. The iconic park in Dadar has been declared a silence zone by the HC, and can be used only for sports. The HC’s permission is required if the ground is to be used for cultural or other events.

The state government and BMC move the HC every year to seek permission for parking of vehicles at Shivaji Park during Ganesh immersion. This year, too, they did the same.

A bench headed by Justice Abhay Oka asked the government and the civic body to give an undertaking that they would find an alternative plot of land next year for parking vehicles.

The bench was hearing separate applications filed by BMC and the government seeking permission to allow parking of vehicles at the ground during the Ganeshotsav which starts from September 5.