Mumbai (The Hindu): Two employees of a car showroom were charred to death in the early hours of Sunday after a fire broke out at the Excell Autovista Maruti Showroom on the ground floor of Aditya Planet building in Sector 10, Kharghar.

The deceased, Jitendra Kumar and Krishna Jamna Bodvar, did housekeeping work at the showroom and lived there too. They had locked the shutter from inside, according to the police. 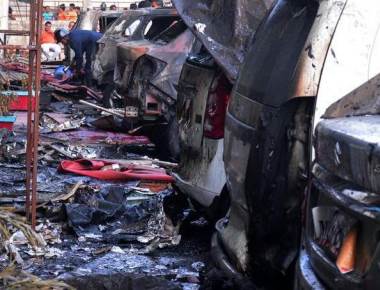 Around 4.30 a.m., the building’s watchman noticed smoke and flames coming out of the showroom. “He tried to open the shutter, but couldn’t because of the flames. He alerted us, and we immediately informed the fire brigade. We also started using our fire extinguishers,” Santosh Paul, the chairman of the housing society said.

Six fire engines were rushed to the spot, but fire officials found it difficult to reach the showroom as the open area outside the shop had been used to park the vehicles on display. Work to douse the blaze continued for about five hours, an official said. The entire showroom was gutted, but the blaze was confined to the ground floor, he added. After the fire was doused, the charred bodies of Kumar and Bodvar were removed from the mezzanine floor of the showroom.

“We received a call around 5.08 a.m., after which we left for the spot. Prima facie, the fire seems to have been caused by a short circuit,” a fire officer said.

According to Mr. Paul, the building is around five years old. Even though a society has been formed, the conveyance deed has not been handed over to them yet. “The owner of the showroom has made many internal changes, and since the conveyance deed is yet to be transferred, we do not have the power to take any action. The first floor of the 12-story building comprises parking space for the residents. The fire was fortunately brought under control in time, or else it could have caused even more damage in the building. We will demand a structural audit of the building from the builder, Galaxy Developers, to ensure it is still safe for residing,” he said.

“As of now, we have just made a note of the incident. In further investigations if we find negligence on part of the owner, we will register a case against him,” Senior Police Inspector Dilip Kale from Kharghar Police Station said.