Mumbai, (The Hindu): For the second consecutive day on Friday, the Legislative Assembly’s monsoon session was marred by controversy over the demand to make singing Vande Mataram compulsory for schools and colleges. The House witnessed acrimonious scenes when BJP MLAs attacked Samajwadi Party legislator Abu Asim Azmi, who is opposed to the proposal. 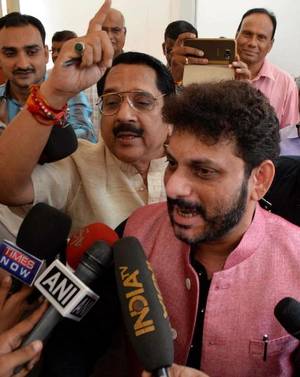 The issue was raised during Zero Hour by BJP MLA Anil Gote, who said, “Some leaders like Abu Azmi have objected to it while many, like martyr Abdul Hamid, destroyed Pakistani tanks with Vande Mataram on their lips. Why are certain people objecting to it now?” Mr. Azmi said many Muslim leaders had contributed to the national cause, but the BJP is only looking to politicise the issue. “I will die but not sing Vande Mataram,” he said.

His statement led to an uproar, with the Congress joining the protest. Mr. Azmi said he was against the demand to make it compulsory. “I am opposing any move to make singing Vande Mataram compulsory. If my faith tells me that singing Vande Mataram is against [its tenets], then I shouldn’t be forced to do so.” Echoing him, Congress MLA Aslam Shaikh said, “There are two versions of Vande Mataram; After Independence, the government is forcing one version on us. It is wrong and should be opposed.”

Citing a recent order of the Madras High Court which made singing Vande Mataram at least twice a week compulsoryin Tamil Nadu schools, Mr. Purohit had demanded that the State government formulate a policy in this regard. Mr. Purohit, the BJP chief whip in the Assembly, had also demanded Vande Mataram be made compulsory for everybody at the beginning of any public event, and the National Anthem at its conclusion.

Mr. Azmi told reporters last night he would not sing Vande Mataram even if he is “thrown out of the country”, while Mr. Pathan had said he would not sing it “even if a revolver is put to my head”. Raising the issue in the House on Friday, BJP MLA Anil Gote said, “There shouldn’t be opposition to Vande Mataram. It is a patriotic song and it shouldn’t be opposed by people like Abu Azmi.”

BJP legislator Eknath Khadse said people of all faiths would sing Vande Mataram during the freedom struggle. “If a person lives in this country, what’s wrong with being grateful?”— with PTI inputs