Bengaluru, DHNS: Senior BJP leader K S Eshwarappa on Thursday openly defied the direction of state party president B S Yeddyurappa by attending a meeting of the Sangolli Rayanna Brigade, an organisation of OBCs and Dalits. 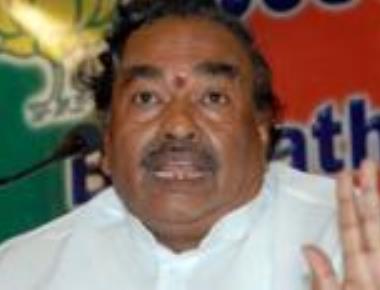 The defiance by Eshwarappa comes just two days after Yeddyurappa, in his capacity as head of the state unit of the BJP, had issued a diktat that any initiative to consolidate the support of OBCs and Dalits should be within the party forum.

Eshwarappa has recently been associating himself with the Sangolli Rayanna Brigade, apparently to send a message to Yeddyurappa that he (Eshwarappa) is a force to reckon with. There has been an ongoing tussle between the two leaders from Shivamogga district ever since Yeddyurappa appointed Rudre Gowda as the Shivamogga unit president of BJP.

The brigade held two rounds of meetings, both attended by Eshwarappa, and finalised a list of 22 convenors besides discussing its future plans.

Eshwarappa said he was only an invitee to the brigade. “I am not indulging in any anti-party activities.?I am only trying to strengthen the base of the BJP. Many OBC and Dalit leaders have become disenchanted with the Congress. But they do not want to be directly associated with the BJP?and hence this forum,” Eshwarappa said.He said the brigade was just 22-days-old and has a long way to go.

“An active kid is bound to grab attention. There will be opposition from some quarters,” Eshwarappa said when asked about Yeddyurappa objecting to his association with the brigade.

Earlier, addressing a press conference, Virupakshappa said the support of the OBCs and Dalits is essential for the BJP to come to power in the next Assembly polls. The brigade would be registered as a society. Office- bearers would be appointed, enrolment drive taken up in districts. A mammoth convention will be held at Haveri on?September 26

Ramu said the brigade is not working against Yeddyurappa. “We want Yeddyurappa to once again become the chief minister of the state. We are planning to invite Yeddyurappa to inaugurate the Haveri convention,” he added.

Brigade’s plans
To register itself afresh as a society for the welfare of OBCs and Dalits
To consolidate the support of OBCs and Dalits to Eshwarappa.
Eshwarappa to be a permanent invitee and chief parton of the brigade
To begin an enrolment drive across all districts
To help BJP?come to power in the next Assembly polls