From a family of army men, Akshay always dreamt of serving nation

Bengaluru, DHNS: Major Akshay Girish Kumar from Bengaluru, who laid down his life fighting terrorists at Nagrota in Jammu on Tuesday, came from a family of army men. 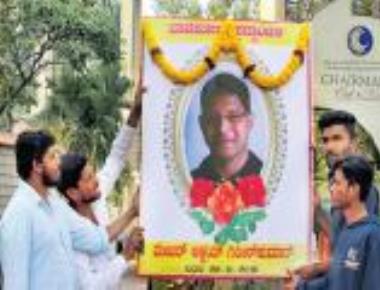 Akshay’s father Girish Kumar served as a wing commander before he retired. He is presently working with Jet Airways as a pilot. Even Akshay’s father-in-law is a retired armyman.

Akshay’s family lives at Jade Garden at Sadahalli on International Airport Road. His parents had left for Jammu from where his body is to be flown to Bengaluru. According to a family friend, Akshay was to go on holiday from December 1.

Ravi Sitaraman, the manager of the Jade Garden Villas, said that Akshay’s parents have been residing there for close to six years now. While Akshay’s father hails from Ballari, his mother Meghana is from Mysuru, Sitaraman said. Akshay is survived by wife Sangeetha and two-and-a-half-year-old daughter Naina. “We would see him only during holidays. That was the only time he would come home. He was a quiet and reserved person,” said Sitaraman. Neighbours recall seeing him go on a walk everyday while he was around.

Akshay who was attached to the 51 Engineer Regiment of the Bengal Sappers studied at Jain College in V?V?Puram here. He had enrolled there only for a brief period of six months in 2003-2004 to pursue his BSc, according to one of his friends. He later joined National Defence Academy.

“Even though he joined BSc course, he always dreamt of serving the country. He was part of the NCC at college. “He was a very friendly person. We have always known him as someone who was lively and cheerful,” said Sachi Bharadwaj, one of his batchmates. “We feel sad to have lost someone like him.”

A friend recalled that Akshay had invited her for his wedding. “It was a love marriage. Sangeetha was his childhood friend and their families had known each other for long. Sangeetha’s father and Akshay’s father were both with the military,” she said.

Residents of Sadahalli, who said they had interacted with Akshay, placed a portrait of his in front of Jade Garden and paid their last respects. “When he came here, he would talk to us fondly. It is very sad that such a nice person is no more,” said local resident Anand.