Udupi (The Hindu): R. Roshan Baig, Minister for Urban Development and Haj, on Friday directed officers to complete the drinking water and underground drainage (UGD) works in Udupi city within the given time-frame. 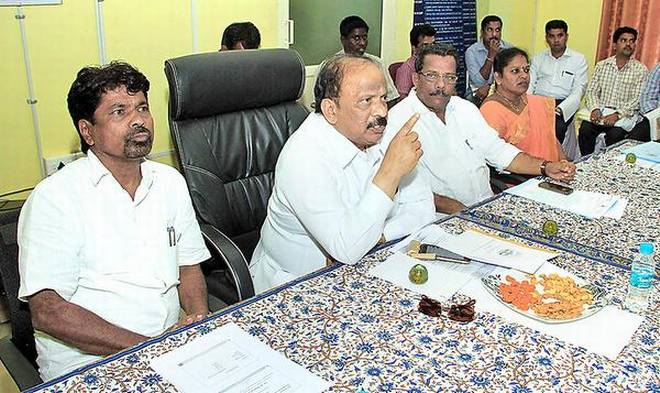 He was chairing a review meeting of the works being taken up under the Karnataka Integrated Urban Water Management Investment Programme (KIUWMIP) at the Udupi Urban Development Authority (UUDA), here.

Mr. Baig said that while emphasis had been laid on supplying drinking water in the urban areas, the focus on the underground drainage works was less. It was essential to give equal importance to both, he said.

Prabhakar Sharma, Deputy Project Director, Karnataka Urban Development and Coastal Environment Management Project (KUDCEMP), said that it had become necessary to purchase land to implement the underground drainage project in the city. The elected representatives should convince people on this issue, he said.

D. Manjunathaiah, Commissioner of Udupi City Municipal Council (CMC), said that a meeting of landowners, whose land would be required for the underground drainage works, would be called soon.

Janardhan, Commissioner of UUDA, explained the achievements and challenges being faced by the authority. He gave a detailed explanation of the development of tanks taken up by the authority.

The meeting was informed that the water supply works under the KIUWMIP in Udupi city was estimated to cost ?101.2 crore, while the underground drainage work would cost ?185.9 crore.

The construction of a third dam against the Swarna River at Shimbra to augment drinking water supply to Udupi city was estimated to cost ?33 crore. This third dam will be constructed about 10 kilometres downstream of the existing Baje Dam.

The survey work for the third dam would be taken up before monsoon.