He was received by the school band along with the headmistress Sr Maria Gracilda, Joint Secretary Sr Noelle Marie and PTA Vice President Shakeel. After the headmistress welcomed the gathering the school flag was hoisted and the school anthem was sung with great pride by the whole school. 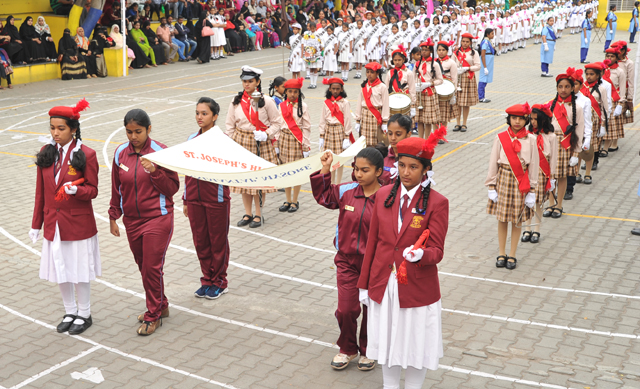 A march past competition followed. The primary students were divided into four teams namely Honesty, Kindness, Growth and Faith. The high school teams represented Determination, Ambition, Positivity and Passion. It was very colourful, creative and well contested by all the teams. Team Growth at junior level and team Ambition at senior level won the contest.

Sharon, district level athlete carried the athletic torch after which an oath was administered to the student representatives to uphold a sportsman spirit. The PE teachers and team managers also took an oath to treat everyone fairly.

The stage programme began with an opening chorus followed by a warm welcome dance. The students of stds I to V dazzled and captivated the audience with their spectacular drill display. Karate students performed a few defence moves and few others punched bricks with their hands, head and elbow which was an amazing feat.

The chief guest gave away the prizes to the winners of the Independence Day march past competition, honoured the band students, taluk level sports winners and Zoya Umer Khan of std IV the star of the day who was honoured by the school for being an achiever in spite of her drawbacks. The chief guest spoke on the occasion highlighting the need to actively participate in indoor / outdoor games. He said that he was overwhelmed by the grandeur of the event. He then declared the ‘Sports Meet’ open by releasing balloons into the air.

About 300 students participated in the event. A prize distribution ceremony was held at the conclusion of the event. Around 1000 students were honoured with certificates and medals for their feat in the march past competition, various events, matches, relay held in honour of annual sports meet. Sheril, a very impressive athlete dominated the events at the senior level to win the individual championship. The junior level individual championship was bagged by Sheeba-Tul-Hamd. Team Ganga won the group championship.

To conclude the most spectacular event of the year, the school band sounded retreat and the school flag was unfurled and handed over to the headmistress. The day ended with the National Anthem.