Belagavi (The Hindu): The popular pilgrimage centre in north Karnataka, Yellamma gudda (hill) housing Goddess Renuka Devi, popularly known as “Yellamma Devi” in Saundatti taluk, reverberated with the chants of “Udho Udho…” on the occasion of Banada Hunnime on Thursday.

Around six lakh devotees, a majority from outside the district, and Maharashtra and Goa, thronged the pilgrimage. 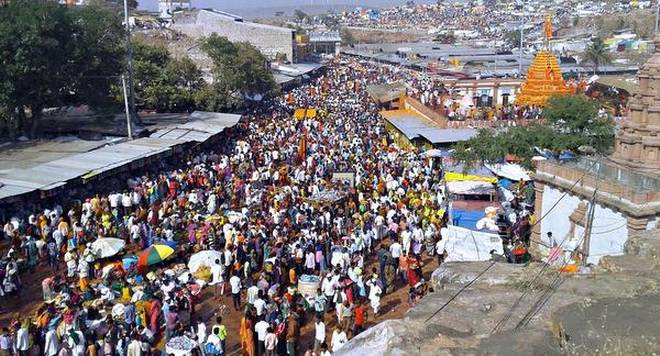 The Goddess is also revered as Goddess Kali and Goddess Shakti (power), besides being the family deity of thousands who visit the temple to pay annual obeisance. The occasion facilitates vendors to make quick money during the fairs which are spread over three months by selling traditional kambli (blanket made out of sheep’s wool), toys, and household articles.

It is a treat to watch the nearly three km-long rows of devotees and traders on bullock carts, on their way to attend the festival from nearby villages. On reaching the hill, they pitch their makeshift tents around Yellamma Hills and stay for the entire season. The temple, however, no longer continues the practice of dedicating young girls as Devadasis. Yet, the fear remains if some some families would carry out the dedication clandestinely in the dark away from the temple.

A major problem that haunts the temple management committee is open defecation by devotees. Presently, there are only 90 rooms with attached and general toilets, besides five public toilets of five units each. These are not enough to ensure hygiene and prevent open defecation, considering the number of devotees visiting the temple throughout the year.

A.S. Gramopadhya, Special Deputy Commissioner of Yellamma Temple Trust, said work on construction of lodging facilities for devotees had been expedited. The building with 240 rooms taken up at a cost of ?15 crore would be completed in four months.

This year the revenue is expected to cross ?16 crore.