Colombo (PTI): Indian cricketers got much-needed match practice as they enjoyed an upperhand on all three days against Sri Lanka Board President's XI in the tour opener that ended in a tame draw here on Saturday. 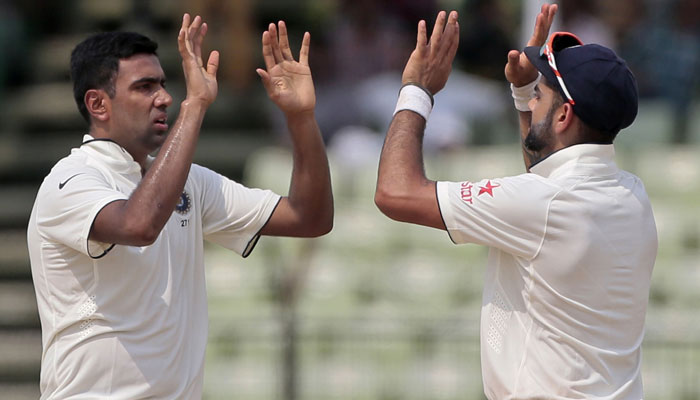 While the batsmen did not exactly set the stage on fire in the second innings getting all out for 180 but the bowlers kept the pressure, restricting hosts to 200 for six in 54 overs as they chased an unachievable victory target of 411 runs.

Premier off-spinner Ravichandran Ashwin (3/38 in 8 overs) warmed up nicely for the Test series while Harbhajan Singh (1/26 in 8 overs) and Amit Mishra (1/42 in 12 overs) also got crucial overs under their belt.

Earlier, India started off from their overnight score of 112/3 but both the unbeaten batsmen KL Rahul (47 no) and Cheteshwar Pujara (31 no) retired to give the lower order a chance to get some decent hit.

Ashwin (0) was bowled off the first ball he faced from Lahiru Gamage (1-20). Harbhajan (4) too lasted only three more overs edging one to slips off Nisala Tharaka (1-14).

Mishra (7) faced 29 balls in a bid to get in some practice after missing out in the first innings. At the other end, Bhuvneshwar Kumar made good on this opportunity given to him even as Mishra and Varun Aaron (2) were dismissed in quick succession. Kumar stroked five fours and scored 37 runs off 56 balls, helping India cross the 150-mark.

Kumar added 37 runs for the final wicket with Umesh Yadav (17*) before he was last man dismissed, falling to Milinda Siriwardana (1-5).

Board President's XI thus required 411 runs for an outright victory, but that was never the purpose of their second innings. Instead, it was about batting time for their Test team members and for the Indians, it was about sending down a few overs. Yadav (1-19) and Aaron (0-29) were handed the new ball and they didn't disappoint.

Yadav bowled with consistency in line and length, and used the new ball to good effect. He was rewarded with the wicket of opener Dhananjay de Silva (6) as KL Rahul took a super catch at third slip diving to his right as the hosts went to lunch at 14/1.

Upul Tharanga (52 runs, 54 balls, 8 fours, 1 six) then came to the crease and stroked his way to a fine half-century in 50 balls, putting on 73 runs with opener Kaushal Silva (83*, 163 balls, 6 fours), who also overcame his first innings? disappointment and warmed up for the Test series with a fine batting performance.

The right-handed batsman reached his fifty off 101 balls and helped his side to tea at 120/2.

Post the break, he held fort even as wickets started falling at the other end. Ashwin (3-38) took three quick wickets to send back Tharanga who charged down the track and was caught at midwicket by Cheteshwar Pujara.

He then bowled Siriwardana (4) and Kusal Perera (1) in quick succession as both batsmen were looking to cut the ball.

Mishra (1-48) also made his presence felt with a wicket, dismissing Shehan Jayasuriya, who was caught at mid-off by Rohit Sharma, as he tried to clear the fence.

Ishant (0-33) and Bhuvneshwar (0-6) returned for a short spell thereafter, but the match was called off with the final 15 overs remaining in the day.

The first Test begins in Galle on Wednesday, August 12.