Mumbai, (PTI) The paucity of pace-bowling all- rounders in Indian cricket played a role in Hardik Pandya being fast-tracked into the senior team but he deserves credit for making the most of his rare talent, says former captain and under-19 coach Rahul Dravid.

Dravid said having fast bowling all-rounders was always a luxury for the Indian team and Pandya has grabbed the opportunity with both hands. 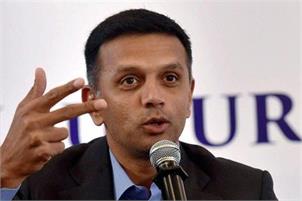 The 24-year-old Pandya, with his big-hitting ability down the order and effective medium-fast bowling, has become a regular feature in India's short format teams.

Since making his debut at the beginning of 2016, Pandya has played 32 ODIs and 27 Twenty20 matches and has taken 35 and 23 wickets respectively apart from scoring some useful knocks.

"Hardik came into the team because of himself. He is the one who has put in the performances and he is the one who has that x-factor. When you are a fast bowling all-rounder in India, there aren't many to compete with and that's the reality," Dravid told reporters at the pre-departure press conference for the Under-19 World Cup team.

The under-19 World Cup will take place in New Zealand from January 13.

"If you are a batsman or a spin bowler in the country, it's tough because there are a lot of people you compete with.

Dravid said India has always been on the lookout for such a talent.

"When that opportunity opened up in the Indian team, we needed to identify that kind of person and credit to the selectors.

"I can go back to the earlier selection committee, when I first took over the India A job. I remember in Madras, even from that time, this thought was there that we need to identify fast-bowling all-rounder in future, Vijay Shankar, Stuart Binny played that role.

The former captain felt Pandya did well to latch on to the opportunities presented to him.

"Hardik got that opportunity when Vijay got injured and didn't come to Australia and he (Hardik) grabbed it with both hands. He bowled quick and batted beautifully, in a particularly Test match, when were 40-6 and got 70, and credit to it he has grabbed it.

"So sometimes you know, sometimes it can happen with certain roles and specifics that people do get fast-tracked because the opportunity exists," Dravid explained the phenomenon of Pandya's rise.