Dubai, Aug 10 (PTI) The Indian cricket team can rise to as high as third in the ICC Test rankings if Virat Kohli's men whitewash Sri Lanka in the three-match series starting on Wednesday. 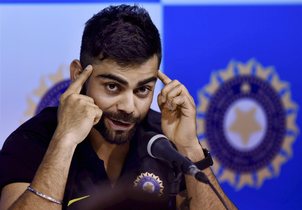 "Fifth-ranked India know that a 3-0 victory can propel them up the rankings table, and depending on the final outcome in the ongoing Ashes series, they could even climb to as high as third place, provided Australia defeats England at The Oval. A 2-1 victory would see India gain three points," the ICC said in a statement.

If seventh-placed Sri Lanka whitewash India 3-0 then they will gain eight rankings points and could climb to fifth and India would drop to 89 points.

A 2-1 win for the hosts, meanwhile, would see them gain four rankings points and, thus, overtake Kohli's side.

The last time India toured Sri Lanka in 2010, the series ended in a 1-1 draw, and in that scenario Sri Lanka would gain a point, while India would remain on 97 points.

Meanwhile, in the ICC Player Rankings for Test Batsmen, fifth-placed Sri Lanka batsman Kumar Sangakarra goes into his final Test series as the highest ranked batsman on either side on 874 points, seven adrift of South Africa's Hashim Amla.

His skipper Angelo Mathews, who will make his 50th appearance next time out, lies a single place and 14 rankings points further behind, with his opposite number Kohli in 10th position, eight points behind Australia's Chris Rogers. Kohli is now 180 runs short of the 5,000-run mark in Test cricket.

In the ICC Player Rankings for Test Bowlers, Sri Lanka's left-arm spinner Rangana Herath is the highest ranked bowler heading into the series in eighth place on 752 points, 13 points behind Australia's Mitchell Johnson.

Twelfth-placed Ravichandran Ashwin, with 124 wickets in 25 Tests to date, is his side's leading bowler with Ishant Sharma (21st) looking to break back into the top 20. Other bowlers likely to feature in the series are; Dilruwan Perera (27th), D. Prasad (29th) and Harbhajan Singh (32nd). Umesh Yadav (47th) holds an 18-point advantage over his team-mate Bhuvneshwar Kumar (48th).

Ashwin is also the highest-ranked all-rounder on either side heading into the series, sitting a point behind South Africa's Vernon Philander in third position, while Mathews is Sri Lanka's best all-rounder in 15th spot.