Shillong, (PTI) Having begun their I-League campaign with a win, Shillong Lajong would look to build a winning momentum when they take on Churchill Brothers in their second home fixture here tomorrow. 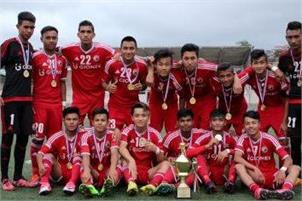 Lajong beat I-League debutants Gukulam Kerala FC 1-0 on November 27 in their opening match at the Jawaharlal Nehru Stadium but assistant coach Alison was not impressed with the performance of his players.

"It was good football but not attractive football (in the first match). For the next match, I expect my boys to play better and focus more on attacking," Alison said.

He said his boys have gained confidence after the first win and have been training hard to make it two in two in their opening two home fixtures.

"After the win on Monday, the boys have gained more confidence. But now our main focus is the next match against Churchill. The boys have recovered well from the first match and we have been training hard. We are ready for our second home match," Alison added.

Churchill will be playing their opening match and for the newly appointed head coach Shevchenko, tomorrow's match will be his first.

Asked about his strategy against the home team, Shevchenko preferred not to disclose much and stated that his team would play according to a plan tomorrow.

"We have not had too much time to prepare as the foreigners arrived late but for the Indian players, the preparation has been good," Shevchenko said.

"It is a fresh team and we will get better game by game," he added.