Tianjin, (PTI) Tennis icon Leander Paes became the most successful doubles player in the history of Davis Cup with a record 43rd win before young guns Ramkumar Ramanathan and Prajnesh Gunneswaran pulled off the must-win rubbers as India advanced to the World Group Play-offs with a sensational 3-2 win over China here today. 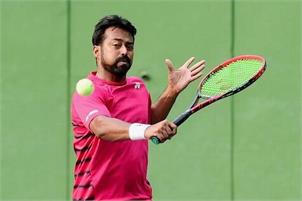 Everything depending on how they fared in the do-or-die doubles rubber, the 44-year-old Paes and Rohan Bopanna downed a fighting Chinese pair of Mao Xin Gong and Ze Zhang 5-7 7-6(5) 7-6(3) to keep India afloat in the second round Asia/Oceania Group I tie.

Ramkumar Ramanathan, who copped criticism from captain Mahesh Bhupathi for his lackluster show in the opening singles, redeemed his reputation by defeating Di Wu 7-6(4) 6-3. The win levelled the tie 2-2.

Captain Bhupathi then played a masterstroke by playing left-handed Prajnesh Gunneswaran instead of Sumit Nagal in the tie-deciding fifth rubber against the Chinese teen sensation Yibing Wu and the Chennai boy did not disappoint as he delivered a 6-4 6-2 win to seal the tie for India.

Prajnesh had come into the side after Yuki Bhambri pulled out due to an abdomen injury. The southpaw was fluent in his strokes and played fearless brand of tennis, going for winners.

Prajnesh, playing only his second Davis Cup tie, being a left-hander could counter Yibing from different angles and he also had the experience of playing on slow surfaces in China. So it proved to be a great tactic from the captain.

It is only for the second time in India's Davis Cup history that the team has emerged victorious in a tie after being down 0-2. However, this win has come in a new format in which best of three set matches are being played at zone level ties.

The last time India competed in the elite 16-nation World Group was in 2011 when it lost to Serbia in an away first round tie.

Paes, India's Davis Cup hero for years, was tied on 42 wins with Italian great Nicola Pietrangeli for long but finally surpassed him, albeit in a foreign land.

During his illustrious career, Paes weaved the longest unbeaten winning streak of 24 matches in Davis Cup with Bhupathi, with whom he ruled the ATP circuit in the late 90s.

Bopanna had expressed reluctance to play with Paes in this tie against China but he played well today. Dropping serve in the third set was the only blemish as he stayed strong in his service games. His 'missile' serves proved too hot to handle for the Chinese and Paes, as usual, was superb at the net.

After trading a break each, the two pairs were tied 5-5 when Paes was broken in the 11th game of the opening set. Gong served it out in the next, saving a break chance in between.

The fight was on with the Indians getting more break opportunities than the home players but struggled to deliver the knock-out punch.

Bopanna served too big and the Chinese were not even coming close to making impactful returns. The Chinese nevertheless stayed strong on their serves and there was no break of serve in the second set.

Gong came out to serve under pressure at 5-6 and faced a set point too but managed to stretch it to the tie-breaker.

It was tight in the tie-breaker as well as it became 3-3 and then 5-all. Bopanna smashed an overhead volley winner to earn the team's second set point and Paes nailed it easily.

The Indians broke Gong in the third game for a 2-1 lead and consolidated it.

In the decider, the Indians lost three games in a row to be down 3-4 from a commanding 3-1 lead. It happened when Bopanna, who was serving effortlessly big and hot till then, dropped his serve in the sixth game.

Paes came out to serve at 5-6 and went down 0-30 but pulled off the crucial hold to force another tie-breaker.

The Indians were experienced enough to dominate the lower-ranked Chinese in the tie-breaker and pulled off a memorable win.