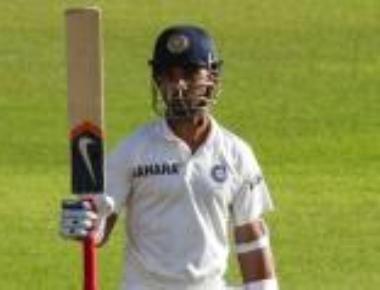 Put into bat, Indian openers Lokesh Rahul (43) and Shikhar Dhawan (62) gave the visitors a solid 108-run start but the batting wobbled after their departure.

Rohit Sharma (7) and Kohli (8) fell in quick succession as medium-pacer Kasun Rajitha (3-47) made his presence felt in the President XI ranks as Indians lost four wickets for 25 runs in the post-lunch session.

Struggling at 133 for four, Rahane (109 not out) and Cheteshwar Pujara (42) then go together to stitch a 134-run fifth-wicket partnership to rebuild the Indian innings.
Pujara and Rahane defied the hosts until tea with the scorecard reading 175 for four.

The two batsmen put on runs at a brisk pace, bringing up the 50-partnership in the 49th over. And then they kicked on, with Rahane bringing up his half-century off 59 balls, with five fours.

Their 100-partnership came up in the 59th over and the duo scored at 4.75 per over during their 28.1-over stay together at the crease. Pujara slowed down a little as spin was introduced to make up for the slow over-rate and that hesitation cost him his wicket in the 66th over.

Rahane though carried on in the same vein as the Maharashtra-born batsman got to his century with a boundary against Jeffery Vandersay (2-76).

Rahane has struck 11 fours and a six in his 127-run stay so faras he helped India manage a healthy run-rate of 3.97 through the day.

The in-form batsman had got the company of Ravichnadran Ashwin (10 not out) at the end of the day's play as the duo managed an unbeaten 41-run partnership.

Kohli decided to rest Murali Vijay, who didn't come out to bat till the end of day's play, after choosing Dhawan and Rahul as openers.

The two openers negated the fresh wicket, with Dhawan riding his luck a couple of times while Rahul was solid as if he had never been away from the national team. They started off slowly though, both looking to bat for time and brought up their 50-run partnership in the 18th over, going to lunch at 78 for no loss.

After the break, the breakthroughs came quick and easy. But not before Dhawan reached his half-century off 74 balls, inclusive of six fours. The 100-mark came up in the 29th over.

At 35 not out, Rahul edged the ball to second slip but the umpire wasn't sure if the catch had been taken cleanly. Hence, the batsman continued on but couldn't add to his score as he miscued a pull in the 30th over and was caught off Nisala Tharaka (1-65).

It gave an opening to the Lankan side, with Sharma walking in at number three. He walked out after facing 14 deliveries, bowled by Rajitha off a yorker. The bowler then went on to toy with the Indian batting line-up, as he bowled Kohli off the fourth ball he faced, albeit it was a no ball.

He was on three at that time, but couldn't go on for long. He was dismissed for a second time in nine deliveries, this time legally caught at third slip off Rajitha in the 36th over. The batsman went for an expansive drive but his footwork remained rooted to the crease as the catch was gleefully accepted.

With a spell of 4-1-9-3, Rajitha heaped more misery on the tourists then, removing Dhawan in the 38th over, caught behind as India crashed from 108 for no loss to 133 for four.

But Rahane had other ideas as the young batsman played a determined knock to see the Indians to respectability on Day1.