Jakarta, IANS: In a case of so-near-and-yet-so-far once again, the Indian duo of Jwala Gutta and Ashwini Ponnappa was ousted from the women's doubles quarter-finals of the World Badminton Championships here on Friday. 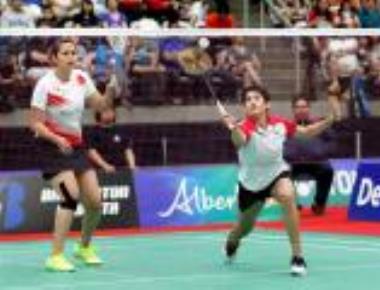 Jwala and Ashwini, seeded 13th, were looking to repeat their performance of the 2011 Worlds when they clinched the bronze, but several errors against the unseeded Japanese combine of Naoko Fukuman and Kurumi Yonaoat cost them the match at the 9,000-seater Istora Senayan.

In the end, the 2010 Commonwealth Games gold medallists lost 23-25, 14-21 in 46 minutes. This was the first match between the two pairs. The World No.12 Indians did not have a great start as Naoka and Kurumi notched up points due to several net errors from Jwala.

The mid-game break and some pep talk from the coaches must have helped the Indian girls as right after that, from 7-11 down, they pocketed the next eight points to go 15-11 up. However, the Japanese fought back to close the gap at 16-all.

It was a neck-and-neck game thereon as neither pair gave away more than a point to their opponent, but at 20-19 the unseeded pair had the advantage.

Jwala and Ashwini saved as many as four gamepoints, but the World No.17 combination from Japan won the game on their fifth attempt to take the lead.

The Indian pair looked down and out following their first game loss which helped Naoka and Kurumi lead from the start and finish the second game in their favour quite easily to enter the semi-finals and assure themselves of at least a bronze medal.

Saina Nehwal and P.V. Sindhu play their respective women's singles quarter-finals later in the day. A semi-final appearance assures a shuttler of at least a bronze medal in the tournament.