New Delhi/Koppal, DHNS: Mallamma's hunger strike led GP chief to give funds for it. Mallamma, 16, from Dhanapur in Gangavathi taluk in the district has hit national headlines, after Prime Minister Narendra Modi praised her gritty fight to get a toilet constructed at her house, during his ‘Mann ki Baat’ monthly radio programme on Sunday. 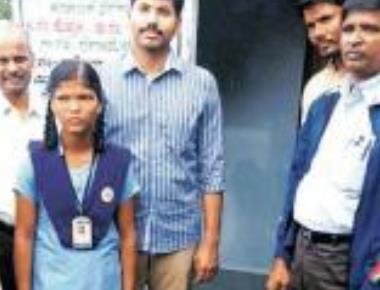 In his address, the prime minister also appreciated the efforts of the village head (Gram Panchayat president) Mohammed Shafi in getting a toilet constructed at Mallamma’s house after he came to know about the girl’s hunger strike for the cause.

Shafi arranged Rs 18,000 and got a toilet constructed in a week’s time as her family did not have money for it.

Describing the episode as an example of the people’s power (Janashakti), Modi appealed to the people of the country to keep giving strength to his call for ‘Swachch Bharat.’
The social media in the district is abuzz with audio clips of the prime minister’s speech. Mallamma is upbeat about her name and her district being mentioned by Modi and has thanked him for that.

Educating others
The girl has gone a step further and is educating her neighbours about the need to have toilets in their houses. Mallamma also makes it a point to speak about the issue during the daily school assembly. This has inspired her schoolmates to submit applications to the authorities for help to build toilets in their houses, through their teachers. Already toilets have been constructed in the houses of nearly 40 of her schoolmates.

Not surprisingly, the girl is now being seen in her school as a crusader for sanitation.

Mallamma dreams of becoming a schoolteacher. Her mother Sanna Ningamma has four children. Mallamma is third among them. Her eldest brother is a BCom student and her sister is married. Her younger brother is a class 7 student.

The family owns a four-acre farm and Sanna Ningamma works as a labourer to make ends meet. Zilla Panchayat Chief Executive Officer R?Ramachandran said this was a matter of pride for the district and will help make it open defecation-free as part of Swachch Bharat Abhiyan.

Mohammed Shafi said three out of five villages in his Gram Panchayat were now open defecation-free.

Out of the 1,428 families, 738 are yet to get toilets built in their houses and they will be offered help for the purpose, he added.