Bengaluru, DHNS: Former minister and writer B?T?Lalitha Naik has received a letter from a Udupi-based man giving her life threat.

“I received the letter from one Sunil Sharma a week ago. He has targeted me for my observations on cow slaughter. He has stated that people like me should be killed,” Naik told DH over phone from Dharwad. 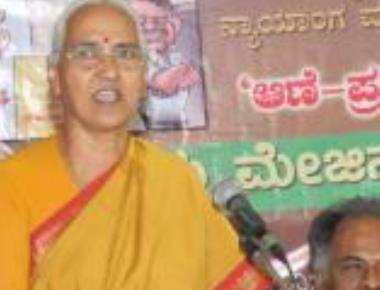 Naik said that she had attended an event about 20 days ago in Chikkamagaluru where she opposed the attack on Dalits for skinning a dead cow. “Expletives have been used against me in the letter. Sharma has written that people like me should be killed instead of cows.”

The former minister in Dharwad to take part in a protest on Tuesday against the killing of progressive thinkers M M?Kalburgi, Govind Pansare and Narendra Dabholkar. She confided in some writers about the letter who advised her to lodge a complaint with the police.

“I will lodge a complaint at the Sanjaynagar police station on behalf of Dr Kalburgi, Pansare, Dabholkar Hatya Virodhi Horata Samithi on Wednesday once I return to Bengaluru. I will also produce the letter before the police,” she added.

Naik was minister for Kannada and Culture in J H Patel Cabinet.