London, (The Telegraph): Made in Britain, forged by Indians and now endangered by the Asian giant. British steel woke up to a nightmare today as it emerged that as many as 16 steel and engineering companies of Swraj Paul's Caparo Industries have been placed "in administration" and the Tatas confirmed that they are shedding another 1,200 jobs. 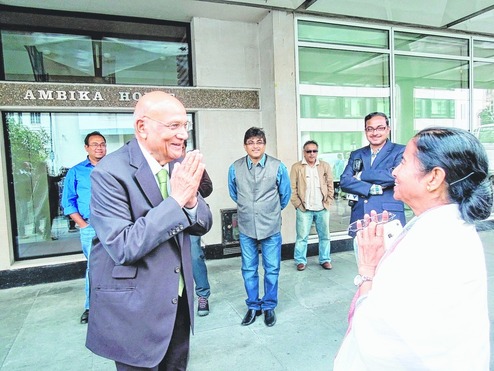 The British are pinning a big part of the blame on China, accusing it of dumping cheap steel in Europe. Another reason is the strengthening of the pound against the euro, which has also badly affected Caparo's exports to Europe.

Although the step is better than the worst-case scenario of "liquidation" - when a company's assets are "torn off and sold and staff offloaded" - the news has shocked the 2.5-million-strong British Indian community where the peer, once very close to Indira Gandhi, is still viewed as "one of the big boys".

PricewaterhouseCoopers (PwC) has been appointed joint administrator over the 16 Caparo companies. Caparo was placed "in administration" at the request of its directors - and their decision to call in PwC was ratified by a court yesterday afternoon.

These are difficult times for 84-year-old Paul, who is mourning the loss last week of his sister, Parkashvanti Gupta, who passed away in Delhi at the age of 93. "She was more like a mother," Paul has said.

The jobs of 1,700 employees are potentially on the line but they will be "attending work as normal and will be paid as normal, so in these respects, it is business as usual while the administrators' review gets underway", PwC said.

In a statement after taking over yesterday, PwC said: "Other than the companies specifically listed, all other business interests of Caparo are unaffected."

Paul is one of the UK's 50 wealthiest people, with a fortune estimated at £2 billion. He holds a large stake in Caparo Industries through its parent company, Caparo Group.

Matt Hammond, lead administrator and partner at PwC, elaborated in a separate statement: "Steel prices and exchange rates have had an impact on some parts of the Caparo Industries group. However, there are businesses in the group that are not directly affected by steel prices, and likewise many where there is both strong customer demand and critical supplier support."

David Cameron, the Prime Minister, told the Commons yesterday that he would take up the question of cheap steel with Chinese President Xi Jinping, who arrived in London last night for a four-day state visit. But no one thinks anyone can prevent China from trying to get rid of huge quantities of its excess steel.

Once the Midlands comprised the heart of industrial Britain. But the country's industrial base has been eroded steadily over the decades, with successive governments either unable or unwilling to save its strategic industries. In that sense, what is happening with the whittling down of Caparo represents a British tragedy.

Almost alone among Indian-origin businessmen in Britain, Paul has tried to make a go of manufacturing. He came to Britain from Calcutta in 1966 to seek treatment for his daughter, Ambika, who was suffering from leukaemia, stayed on after she died, and founded Caparo, which has been his lifetime's achievement.

It will now be up to his children and grandchildren to take the story forward. It is Paul, once described as a "man of steel", who has been trying to rally them.

When Bengal chief minister Mamata Banerjee had called on him at his London apartment in July, Paul had promised Mamata he was prepared to help in education and industry and also in improving facilities at Calcutta Zoo since he had friends at London Zoo, dating back from when Ambika found enjoyment in visiting the animals.

Tata Steel today confirmed the bad news that has been widely expected by announcing a further loss of around 1,200 jobs - about 900 in Scunthorpe in North Lincolnshire and 270 in Scotland.

The announcement that the last steelworks in Scotland will be mothballed could herald the end of almost 150 years of the industry in the country.

Karl Koehler, chief executive of Tata Steel's European operations, said: "The UK steel industry is struggling for survival in the face of extremely challenging market conditions. This industry has a crucial role to play in rebalancing the UK economy, but we need a fairer system to encourage growth."

In the past two years, imports of steel plates into Europe have doubled and imports from China have quadrupled, causing steel prices to fall steeply, according to Tata Steel. At the same time, a stronger pound has undermined the competitiveness of the business's Europe-bound exports, and encouraged more imports.

In response, Tata Steel is concentrating on higher-value markets with a focus on developing stronger and lighter products for its customers, the company said.

The question everyone is now asking is: does British steel have an answer?

The answer is not encouraging, judging by the response of Sajid Javid, the business secretary who was summoned to the Commons today to provide an account of what, if anything, the government was doing to deal with the crisis facing British steel.

Javid blamed market conditions, which can be interpreted to mean: "There is not much the British government can do to save the British steel industry."

It so happens all the big players - Lakshmi Mittal, Swraj Paul and the Tatas - are Indian. Javid himself is part-Indian. ArcelorMittal does not have any plants in Britain but it has been cutting production in Europe.

The unions would like a ban on the import of Chinese steel but that is not an option for the government.

Javid told the Commons: "There are limits to what the government can do in response - no government can change the price of steel in the global market.... Excess capacity in global steel is enormous - more than 570 million tonnes last year, almost 50 times the UK's annual production. The price of steel slab has halved in the past year alone...."

But Roy Rickhuss, general secretary of steelworkers' union Community, declared: "The cruel irony of the Prime Minister welcoming the Chinese President as UK steel jobs are cut partly due to Chinese steel dumping will not be lost on the UK's steelworkers and their communities."

The Speaker of the Commons, John Bercow, was in danger of causing a diplomatic incident today by heaping gushing praise on India just before the Chinese President was due to address a joint session at Westminster of the Houses of Commons and the Lords.

Not everyone in Britain is happy that Cameron's government is seen to be almost "sucking up" to the Chinese leader in an attempt to get him to invest heavily in the UK.

During foreign office questions on the proposed visit of Prime Minister Narendra Modi to the UK later this year, when the importance of the tour was being highlighted, Bercow fired a barb casually but carefully aimed at the Chinese leader: "And of course the Indian Prime Minister is the representative of a great democracy."

Which is to say the Chinese President is not. There was a sharp intake of breath from several MPs.