Centre moves to rein in spiralling price of pulses

New Delhi, Oct 15 (IANS) With the prices of pulses spiralling to Rs.190 per kg, the government on Thursday initiated various measures including imports and invoking the price stabilisation fund to create a buffer stock for reigning in runaway inflation in the commodity. 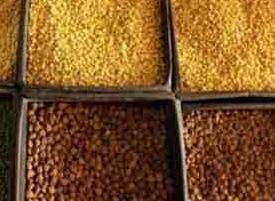 Following an inter-ministerial group (IMG) meeting chaired by him on Wednesday, Finance Minister Arun Jaitley said the government has decided to create a buffer stock of lentils mainly through imports.

"Keeping in mind that some amount of stock is available with JNPT (Jawaharlal Nehru Port Trust, Mumbai), the group decided that we build up a buffer stock preferably by imports to take care of the problem in future," Jaitley told reporters after the IMG meeting.

"More quantity for the next few days will also be imported into the country so that the supply side problem can be taken care of, that will have an impact on prices," he added.

Jaitley also said the government has decided to take recourse to the Rs.500 crore Price Stabilisation Fund to pay for transportation and processing of imported pulses, that would help increase supplies and make pulses available at lower prices.

"We have also decided to invoke our Price Stabilisation Fund and therefore the handling charges at the port, transportation charges, and milling and processing charges would be taken care of in order to make the price of the pulses more affordable," he said.

In an attempt to improve availability and check rising prices of pulses in the national capital, the Kendriya Bhandar will start selling imported 'tur dal' at its 100 locations from Thursday.

The sale of the commodity at Mother Dairy's 300 Safal outlets would begin from this weekend.

State-owned MMTC has floated a fresh tender for import of 2,000 tonnes of 'tur dal', to be delivered by next month, to further improve the supply of pulses in the country.

These decisions were made at a meeting of an inter-ministerial committee, headed by consumer affairs secretary C. Vishwanath, held here on Monday.

"Regarding 'tur dal', Kendriya Bhandar informed that all arrangements have been made to make imported 'dal' available in its outlets in Delhi from October 15. Safal will also sell the 'dal' through its outlets by this weekend," the food ministry said in a statement.

"During 2013-14, pulses worth $1.9 billion were imported. In the following year, the import bill on account of pulses was $2.6 billion showing an increase of 36.8 percent on year-over-year basis.

In the April-June period of the current fiscal, the country has already imported pulses worth $0.66 billion," said a study on pulses by industry body Assocham in September.

Meanwhile, India's retail inflation, based on the consumer price index (CPI) for September, increased to 4.41 percent, from 3.74 percent recorded for the previous month, on the back of higher food prices, data showed on Monday.

Contributing most to food inflation in September were pulses, which were costlier by nearly 30 percent.