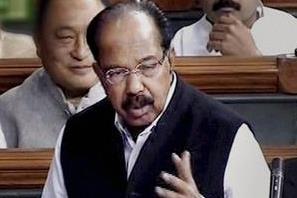 Not only on the land bill, the government has not applied its mind while proposing key changes to the Goods and Service Tax (GST) bill, he added.

"Right from the beginning, we have been telling that there is no need for effecting such amendments through series of ordinances. There is some deficiency in this government. They first act, then think. They should first think, then act. The land bill is one of the examples. Even GST is also an example," Moily said on the sidelines of an Assocham event.

Moily is also the chairperson of Parliamentary standing committee on finance.

The NDA government has proposed some changes to the 2013 Land Act through an ordinance in December last year. The bill to replace the ordinance was passed by Lok Sabha but could not be put to vote in the Rajya Sabha where the BJP is in minority. Hence, the ordinance was re-promulgated twice.

At present, there is a political slugfest over the Ordinances with opposition Congress, CPI-M and JD-U seeking "total withdrawal" of proposed changes by the NDA government in the 2013 Land Act and inclusion of some additional measures to further strengthen the law in favour of farmers.

On the GST bill, Moily said, "We are supporting it with modification we suggested... it is premature to say whether proposed changes will be accepted."

The select committee of Rajya Sabha has examined this matter and the Congress party has given a dissent note also, he said, adding that it would be good if the government looks into those issues with pragmatic approach.

Asked if the GST bill would be passed in the ongoing session of Parliament, he said that the government is "anxious" about it so that is implemented from April, 2016.

Moily also said that the GST has to be done but it should be done with direct tax code. "Both together will definitely have holistic approach for the tax reforms."