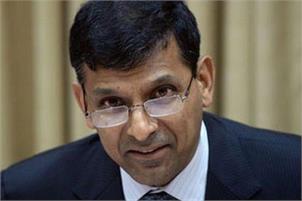 "We are in recovery. That's broadly what we said before and by and large, we would stick to that. There is volatility in this recovery process. So, it's not a strong (and) sustained recovery where all the signals are exactly in the same direction," he said.

Rajan was speaking to reporters after the RBI board meeting, which was addressed by Finance Minister Arun Jaitley.

The RBI chief described the index of industrial production (IIP) numbers released yesterday as "certainly somewhat disappointing", though he did observe that the economy is broadly moving in the "direction of strengthening growth".

The growth is "not as strong as we would like as a country... we have to see how it progresses".

The industrial output for the third month in a row remained in the negative territory, contracting 1.5 per cent in January due to poor showing of manufacturing and capital goods sector.

The declining industrial output prompted India Inc to press for a rate cut by RBI, which is scheduled to announce its monetary policy on April 5.

"Both the markets and RBI are comforted by that. How that feeds into monetary policy is... you have to wait and watch. I have said before that it is contingent... I don't comment on the direction of monetary policy before the policy date or whatever dates we take action. We explain our actions at that time."

Jaitley decided to keep the fiscal deficit target at 3.5 per cent of GDP for 2016-17, overlooking the suggestion for greater public spending to boost growth.

Fielding questions on fiscal deficit, Rajan said the government could explore the possibility of moving to a cyclically-adjusted fiscal deficit target.

"There are ideas that have been floated, for example, moving to a cyclically-adjusted fiscal deficit rather than a fiscal deficit that does not take into account ground condition. This is something that a number of countries also do. My guess is that all these issues will also be explored by the commission that is looking at this," the governor said.

The government has decided to set up a committee to review the Fiscal Responsibility and Budget Management (FRBM) Act and look into the feasibility of setting a range for fiscal deficit targets rather than a fixed figure.