New Delhi, PTI: Attributing the recent crash in stock market to global factors, Finance Minister Arun Jaitley today said there was no need for "exaggerated panic" and investors should keep the economy's inherent strength in mind while investing. 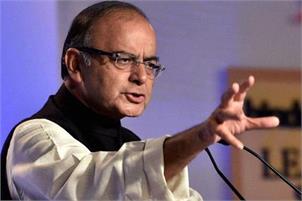 The Finance Minister said the government will continue to pursue policies to support growth amid global slowdown.

The benchmark BSE Sensex, which crashed by massive 807.7 points yesterday on global cues, was trading up around 100 points in the pre-close session today.

"... it would be a part of prudent investment reaction that the inherent strengthen of Indian economy is kept in mind by investors rather than react disproportionately to what the global developments are," Jaitley said.

The minister said major sell-off in global markets created a chain reaction impacting the markets world over including in India.

"There could be several reasons, which are predominantly outside the country, the uncertainty in the Fed rate or what's happening in Europe or the slowdown anticipated in China. Now, these global factors will remain and will have to be tackled globally by those economies.

"... there need not be any exaggerated panic in India for the reason that India as an economy even in the midst of global slowdown has clearly stood out to maintain a 7.5 per cent plus growth rate," Jaitley said.

The government is formulating policies and "is conscious of the areas of support which are required to be given to the economy and fully committed to providing those support."

Amid global slowdown, Jaitley said services and manufacturing sectors are both recovering and hopefully would improve further on account of monsoon and generate further demand.

Terming non-performing assets as a problem, Jaitley said the government is considering more steps to empower banks to recover bad loans and the problem will be contained soon.

"These are the loans which were given earlier by these banks and as a part of prudent policy it has been considered that the balance sheets should be transparent. The banks are going to take all steps possible to recover the loans from debtors," he said.

The Finance Minister added that the Reserve Bank, though various policies, has empowered banks to recover NPAs. By September 2015, the gross NPAs of PSBs had increased to Rs 3,00,743 crore as against Rs 2.67 lakh crore in March 2015.

Pointing to some over-reactions to reports in the section of media with regard to the state of the public sector banks, Jaitley said, "In any case the volume and extent of the problem should not be exaggerated so as to lead to any panic."

Regarding fund requirements of banks, he said the government will provide whatever capital they need because these banks have a very important role to play in supporting the Indian economy and their support is also required for supporting further growth.

Last year, government announced a revamp plan for PSBs -- Indradhanush -- to infuse Rs 70,000 crore in state-owned banks over four years, while they will have to raise a further Rs 1.1 lakh crore from the markets to meet their capital requirements in line with global risk norms Basel III.