Modi's visits need to be backed up with action on ground:Rajan

New Delhi, Sep 30 (PTI) Reserve Bank Governor Raghuram Rajan today described Prime Minister Narendra Modi as being "ahead of us" but said his visits abroad need to be backed up with "action on the ground". 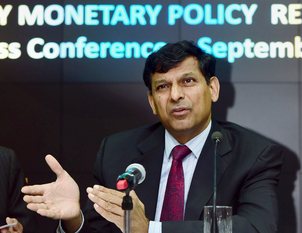 "I think it is changing positively," he remarked on the world view of India in the aftermath of Modi's foreign visits.

He is a "very articulate spokesman for India", he added.

"What we need to do is back up his visits with action on the ground which reinforces the good impression that is created," Rajan told NDTV.

The RBI governor, who has often been seen as not toeing government line on the monetary policy and other issues, acknowledged Prime Minister's initiative to market India as an investment destination but said the message of a strong Indian economy has to be backed up with action on the ground.

"I think he (Modi) is ahead of us. So we have to come up to speed in a number of dimensions. For example if the idea of India as a strong economy is sold outside and they come in, and they don't find the ease of doing business, the permissions, etc. people aren't (happy)," he said.

He said it is known abroad that "there are some issues that they have to deal with, but it should not be worse than their expectations.

"So I think we need to steadily improve the reality on the ground, this attempt to improve the business environment which is proceeding on many fronts is I think a great step in the right direction," he said.

Rajan said the relationship between the RBI and the government has been strong, but added that he did not always agree with the finance minister's point of view.

"Otherwise, the public should start getting worried that the central bank is becoming too acquiescent. In a sense we have to be a gatekeeper and sometimes say no!" he said.