Onion prices go through the roof, retail at Rs 80/kg in Delhi

New Delhi, (PTI): Onions are adding to the misery of consumers, which at the retail level today shot up to Rs 80 per kg in the national capital due to tight supply despite the government's steps to keep a lid on prices. 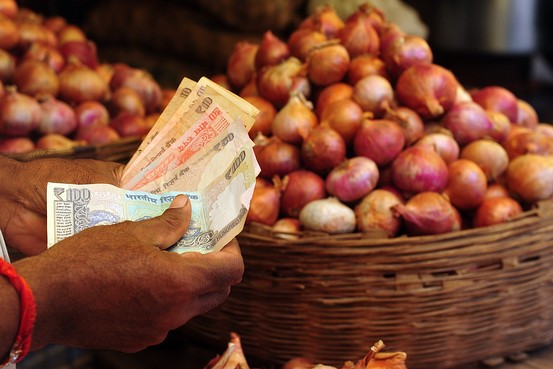 The retail prices have risen, taking strong cues from the Azadpur wholesale mandi, where onions are available at as high as Rs 48 per kg today.

The onion rate at the mandis in Delhi is ruling firm because wholesale traders are getting the commodity at very high prices from key growing states like Maharashtra, Rajasthan, Gujarat, Madhya Pradesh and Karnataka, he explained.

Depending on quality, the price varies between Rs 70 and Rs 80.

There is onion stock in these states, but rates quoted are very high, he added.
For instance, the wholesale price of onion at Lasalgaon in Maharashtra -- the Asia's biggest market for onions -- rose to Rs 43 per kg, the highest so far this year, due to sluggish supply of the crop.

Eventually, the ripple effect of rising wholesale prices gets reflected in the retail market, which is mostly unorganised, Sharma said.

Muntu, who sells only onions and potatoes near Kali Bari Temple, said, "I was selling onions at Rs 50-60 per kg till last week, but today I am selling at Rs 70-80 per kg because wholesale prices have risen sharply in the last two days."

A similar increase in prices is being witnessed in other parts of the Delhi and the national capital region (NCR).

Meanwhile, a central Small Farmers' Agriculture-Business Consortium (SFAC) -- which has purchased 7,000-8,000 tonnes under the price stabilisation fund -- has been selling onions through Mother Dairy's Safal outlets as well as 100 booths of Delhi Milk Scheme (DMS).

The cooperative Nafed has also supplied 2,500 tonnes to the Delhi government, which is selling at a subsidised rate of Rs 30 per kg in 280 locations in the capital.

Meanwhile, Nafed has re-invited tenders for import of 10,000 tonnes of onions, which are expected to arrive in the next month.

Onion prices are hardening due to the fall in production and sluggish supply of stored onions, which are meant for meeting demand during the lean July-September.

Total onion production is estimated to be lower at 189 lakh tonnes in 2014-15 crop year (July-June), slightly lower than 194 lakh tonnes a year ago.

Maharashtra, Karnataka and Madhya Pradesh are the top three onion-producing states in the country.