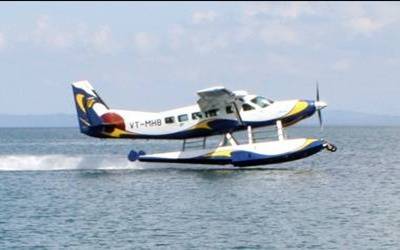 Kerala Tourism has been mulling seaplane operations on the route for a while, but the local fishermen's community has been opposing it as they fear that fishing would be affected if aircraft landed on water bodies, especially on rivers.

The state government expects that they would be able to launch operations with the help of the 10-seater Quest Kodiak 100 amphibian, which is the first aircraft purchased by the company, the official said.

The seaplane arrived at Cochin International Airport, which would be the operating base for the service.

This aircraft was flown by two Kochi-based pilots from the US on September 27 and it arrived here on Friday after flying for 80 hours over four continents -- North America, Europe, Africa and Asia -- in weather conditions varying from minus 20 degrees Celsius to plus 50 degrees.

En route, it halted at 20 places for refuelling.

A second aircraft of the company is currently undergoing special modifications in the US for water operations and will arrive next month.