San Jose, April 1 (IANS) Luxury electric car maker Tesla Motors, the facility of which Prime Minister Narendra Modi visited in Silicon Valley last year, has identified India as a market for one of its most affordable models that has a price tag of $35,000, said a top company official. 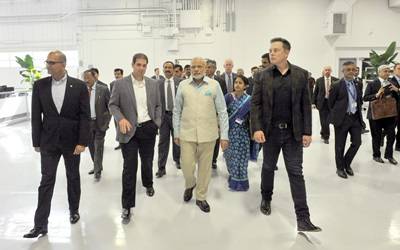 Unveiling the model's prototype on Thursday, Musk said the car would go into production in 2017.

According to him, the car would accelerate from 0-60 kmph in less than 60 seconds and can go up to 345 km on a single charge.

The company said once the production starts, deliveries will begin in North America.

When the production is ramped up, deliveries in Europe, Asia-Pacific region and right-hand drive markets will happen.

According to Musk, he and Modi talked about electricity generation and the way to skip ahead as it happened in the cell phones where it skipped ahead of landlines.

Musk then said rural areas can have solar panels with battery packs which means there need not be electricity lines and skip ahead to next generation to power generation.