Mangaluru: Life is a journey. The path we take, what we look back upon, and what we look forward to is up to us. We determine our destination. For the Balmatta Musical Association (BMA), it has indeed been a long and enriching journey of 90 years.

Those of us who are a part of the BMA at this historical juncture, have the good fortune not just to celebrate the anniversary of an association which has carved a niche of its own in the hearts and minds of all who have experienced its largesse but also to reminisce with gratitude the manifold contributions of all who participated in its journey. Way back somewhere around 400 BC, Plato, student of Socrates and teacher of Aristotle declared that ‘Music gives a soul to the universe, wings to the mind, flight to the imagination and life to everything.’ I wouldn’t be straying too far from the truth when I say that the members of the Balmatta Musical Association, with their melodious voices and God given talents have done just that for more than 90 years, for nearly a century, making their presence felt in every service, in every celebration and during every momentous occasion. There is absolutely no doubt that all who were fortunate enough to be present in the Thanksgiving Service & Choral and Orchestral Concert by Oscar Weltha held in the CSI Shanthi Cathedral, Balmatta, on Sunday, 12 February, 2017, to commemorate the 90th Anniversary of the BMA would agree that it was truly a runaway success! 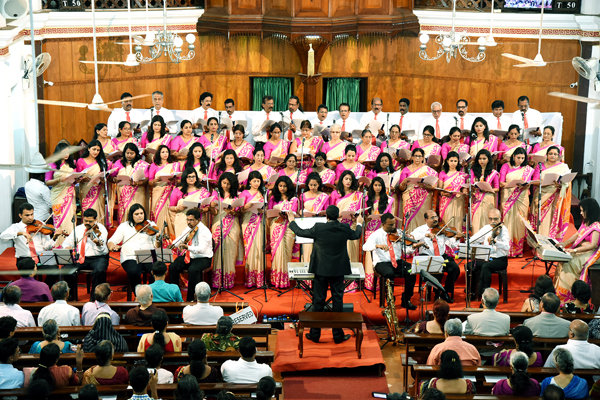 The Choral and Orchestral Concert began with a bang with an orchestral medley, a dexterously amalgamated musical twosome of Evangeline Booth’s ‘The Star in the East’ & the scintillating piece ‘Tout Nest Que Vanite’ as the prelude. Johann Sebastian Bach is known to have once said, "I play the notes as they are written, but it is God who makes the music.” God has showered His mercies upon the BMA over the years and has tended the tiny sapling into a spreading tree. Rt Rev. Dr J.S.Sadananda, one of BMA’s past presidents, invoked God’s blessings upon the Concert through a prayer. 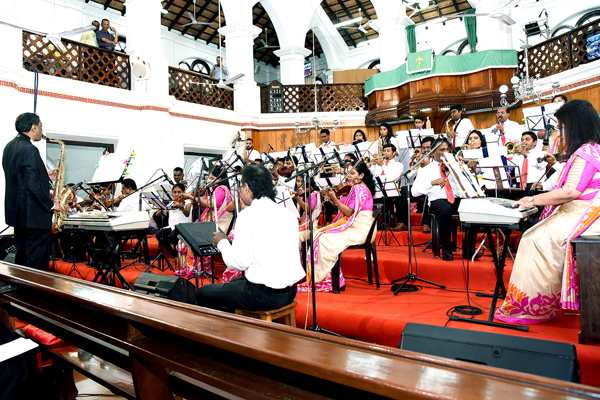 Born on 12th September, 1856, as the son of a shoemaker, English choirmaster, organist and composer, Caleb Simper, produced a prodigious amount of Anglican Church music and organ pieces. Written in an unsophisticated, popular style and aimed at small parish choirs and unskilled organists, his anthems in particular, became widely popular and sold over five million copies during his heyday. On 28 August, this year, the innumerable beneficiaries of the vast gamut of Simper’s compositions will remember him very specially, as they observe his 75th death anniversary. It was therefore appropriate, that the BMA paid a special tribute to the unsung hero of Choral music by singing as many as four of his masterpieces. The music lovers of Mangalore savouring the concert in the hallowed precincts of the Shanthi Cathedral were given a foretaste of Simper’s magic when they were treated to one of Simper’s most highly gifted anthems in the genre of Sacred Music, ‘Enter into His Gates’ which has the distinction of being an all-time favourite in Church circles. This was followed by another Simper classic, ‘Shepherds Abiding’ which literally electrified the jam packed audience. 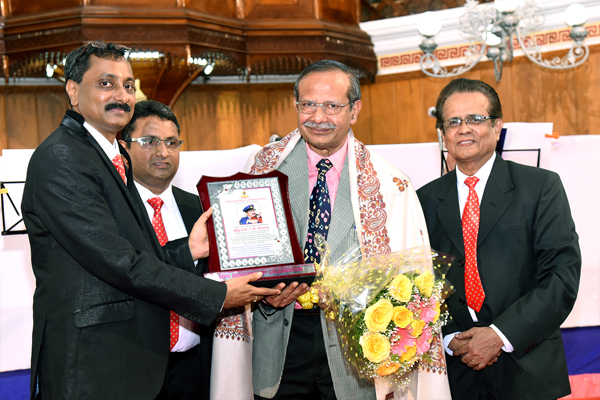 James McGranahan was a talented American musician who lived between 1840 and 1907. Gifted with a rare tenor voice, McGranahan made a name for himself as one of the great writers of Gospel songs, Hymns & Tunes, many of which are popular even to this day. Some of the familiar hymns for which he wrote music include the all-time favourite ‘There shall be Showers of Blessing’ & ‘The Banner of the Cross’. The next gem presented by the silvery choristers of BMA was the reassuring hymn ‘If God be for Us’. The resounding applause it received from the audience reiterated the indelible impact of the hymn.

An anthem is a musical composition of celebration. In music theory and religious contexts, it also refers more particularly to a short sacred choral work and still more particularly to a specific form of Anglican Church music. Amongst Simper's larger works are the Cantatas, The Rolling Seasons and The Nativity of Christ. The BMA choir with 31 sopronos, 8 altos, 6 tenors and 8 bass singers brought Simper’s celebrated anthem ‘Immanuel’ to life in a concerted outburst of the soul! All of us who just listened to this magical arrangement by the inimitable Simper realized why Simper’s anthems spread like wild fire throughout the nations.

There are hymns which we like and there are hymns which we adore! The BMA’s Men’s choir served us a familiar dish in a different recipe - Joseph Scriven’s evergreen magnum opus ‘What a Friend we have in Jesus’ adapted to the traditional Tamil tune arranged by Justus. The extra zing in the rendition by the resonating Men’s Choir was, I am told, because this hymn was one among Oscar Weltha’s top two favourites, especially by virtue of its soulful lyrics. An interesting bit of trivia for music lovers – ‘What a Friend we have in Jesus’ is one of the most translated hymns ever and is available in German, Russian, Tamil and Kannada, to name just a few!

A beautiful saying goes like this, “Words make you think. Music makes you feel. A song makes you feel a thought.” This is exactly how I felt when I heard the BMA Young Voices sing Marshall Hall’s lilting classic, ‘Thanks Thanks I Give You Thanks’.After listening to the miraculous voices singing the choir with a confidence that belied their age, I was not surprised to see the smile of satisfaction and contentment on the faces of the BMA veterans here who, if I might venture a guess, I’m sure must be thinking, “Tomorrow’s BMA is in good hands!”

After a brief pause, wherein the Chief Guest of the evening Wg Cdr I. D. Soans. Professor of Computer Science, Atria Institute of Technology, Bengaluru, himself a versatile musician, was felicitated, released the 90th Anniversary souvenir and shared his thoughts with the audience; the concert continued casting its spell on the already enraptured audience.

Haldor Lillenas (19 November 1885 – 18 August 1959) is one of the most important twentieth-century gospel hymn writers and publishers" and is regarded as the most influential Wesleyan songwriter and publisher in the 20th century. In 1982, Lillenas was inducted into the Gospel Music Hall of Fame. Lillenas’ mesmerising orchestral piece, ‘Wonderful Grace of Jesus’ kept the discerning audience enthralled bringing to one’s memory Nietzsche’s famous quip, ‘Without music life would be a mistake’.

One of the hallmarks of the Balmatta Musical Association is the passing on of the legacy of singing through generations. I wouldn’t be exaggerating when I say that almost all the founder families of the BMA have at least one representative who is keeping the rich tradition alive and kicking. As the choir sang ‘Faith of Our Fathers’, the best known composition of noted English hymn writer and theologian, Frederick William Faber, Rachel Priyanka Furtado, one of the budding sopranos and granddaughter of late Ethel Furtado, who was one of BMA’s soloists during the late 50s, captivated the listeners with her solo. The beautiful rendition proved that the inimitable Leo Tolstoy wasn’t far from the truth when he declared, ‘Music is the short hand of emotion’.

James Bowman Overton Clemm (1855-1927) was known to have composed many haunting tunes for songs of worship. The versatile choristers of the Balmatta Musical Association moved on to sing a melodious choir in Tulu, one of the local languages, a language which regularly finds an important place in the worship services of the churches from the Basel Mission tradition. The choir ‘Yennanneeye Nadapaala’ was adapted to the tune composed by J. B. O. Clemm.

It is no secret that the inimitable young virtuoso Oscar Weltha is a magician who dons many hats. Along with playing an enviable array of musical instruments with aplomb, he is adept at rearranging lyrics and music, giving the choirs and orchestras a unique twist. One such innovation, ‘Kristhesu Ninna Sevege’ was the next dollop of music during the musical evening. The highlight of the choir was a duet by Sushma & Sanjana Bangera, BMA’s singing sisters, who hail from yet another family of talented singers and are blessed with beautiful voices.

Easily one of the most liked, most sung and most experimented with hymn ever, ‘The Lord is my Shepherd’ became last time the BMA celebrated the memory of the indomitable Caleb Simper that evening. The euphonic voices of the BMA choir reverberated in the heritage ambience of the Shanthi Cathedral as they sang the unforgettable lyrics of what arguably is known as the psalm for all times.

After acknowledging the contribution of Mr John Chandran in designing the cover page of the 90th Anniversary Souvenir and a prayer by Rev. Robinson Barnabas, Rt Rev. Dr C. L. Furtado, Bishop Emeritus, lead the congregation in the Lord’s Prayer and pronounced the benediction.

Since its inception way back in the year 1926, the Almighty has not only showered His bountiful blessings upon the Balmatta Musical Association and tided it through thick and thin but has nurtured it and made it a blessing to the innumerable beneficiaries in its sphere of influence. It was only appropriate that the evening’s Choral & Orchestral Concert ended with George S.Schuler’s ‘Make Me A Blessing’ with the entire contingent of the Balmatta Musical Association taking stage. The grand finale saw the orchestra and choir together on the stage for the first time during the entire evening. The rapturous applause of the connoisseurs of music gathered there not only spoke volumes about the success of the Choral and Orchestral Concert but left all thirsting for more!

This article would be incomplete if I did not acknowledge the selfless contributions of all the Music Directors over the years who have invested their time and talents for the BMA. One cannot forget the labour of love of late Denzil Karkada who shouldered the onerous responsibility for 49 years, more than half the life of BMA! We thank God for all of them.

Long live Balmatta Musical Association! Thank you God for all the choristers, all the musicians, all the Music Directors, all who have been a part of and contributed to the rich tradition and legacy of the BMA for 90 glorious and blessed years! We pray that the Almighty continues to bless the BMA and makes it a blessing to all who are in its sphere of influence in the years to come.